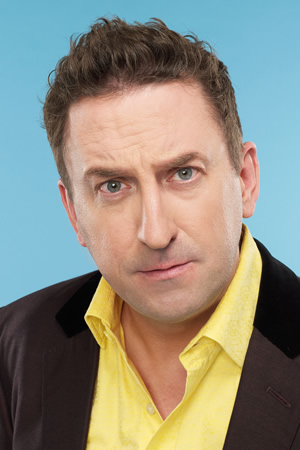 Lee Mack hosts Duck Quacks Don't Echo, a show which aims to find out whether certain fascinating facts are actually true or not...

Hi Lee. Why did you sign up for Duck Quacks Don't Echo?

I'm getting to the age now where I'm trying to impress my kids more than anything else and they love stuff like this; facts, science, experiments... Plus, I quite like the idea of being a host for a change because I'm normally a panellist on panel shows.

How did you find hosting? Was it easier or trickier than you thought?

It's neither, just different. When you're a panellist your job is to disrupt the host, they're the teacher, you're the pupil, and suddenly I'm now the teacher. You'll read the autocue wrong and they'll take the mickey, which is normally what I do to other people. It's a bit like cracking the whip because you've got to keep things on track.

The series stands out from other panel shows - it's not every day that you see Holly Willoughby sniffing people's armpits. Did you help compile the facts that you put to the test?

I can't take any credit for that whatsoever. The less I know about it the better, really. I like things to be as new to me as they are to everybody else, then you get a genuine reaction.

Before doing Duck Quacks..., what was the best piece of info you had at your disposal?

Interestingly enough, I had read that duck quacks don't echo. It turns out, however, that, unlike all the other facts featured on the show, this one isn't true. The one that isn't based on any truth whatsoever is the name of the series!

Were any facts harder to prove than others?

Taste-testing one of the most expensive Coffees in the world went, not wrong, but... There is a type of cat that people feed coffee beans to that, once pooed out, they collect and roast...
As far as I was concerned it was the nicest coffee of the lot, but none of the others agreed. That was hard to prove scientifically because taste is arbitrary, but most of the facts are black-and-white cases of 'yes' or 'no'...

Do ginger people have a higher tolerance for pain? We lined up loads of ginger people, shot them with paintballs, then did the same with non-ginger people, and it turns out the ginger group sustained the pain the longest. We looked at the science behind why that might be and there is a reason... although I can't remember what it is. 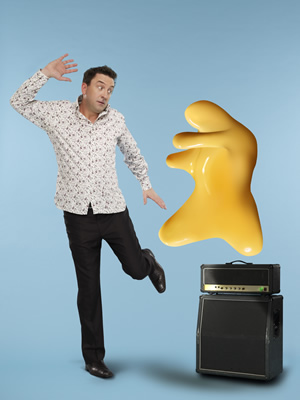 Which experiment did you most enjoy conducting?

I liked the 'custard can dance' one. If you throw custard into an audio speaker and send sound through it, the custard changes from a liquid to a sort of semi-solid and starts dancing around. As soon as you pick it up, it melts in your hand like something from a weird science-fiction movie. It's brilliant.

So filming has proven to be a very educational experience?

What else do you need to know in life apart from that custard can dance? Everyone says you can't sneeze with your eyes open, either, but I've always suspected you can. When I'm driving and sneeze, I'm sure I keep them open.

It's just the age-old fear that your eyes might pop out...

I remember getting told that I can't have sex, otherwise that would happen. If you don't want your children to do something, always follow it up with 'otherwise your eyes will pop out'.

You've got a great line-up of guests, from Dara O Briain to Olivia Colman. Who was the most game?

Everyone was game, but if I had to pick one moment of bravery it was when Mel C agreed to be glued to a ceiling upside-down by her feet with superglue. I was quite worried because, yes the glue will hold you up, but that doesn't mean the soles will stay stitched to the shoes. Then again, if you were to die, what a way to go.

Have you got any unusual facts about yourself?

I've said this quite a few times in interviews, but it's true: the first horse I ever rode was Red Rum.

Looking over your career as a whole, what's the best piece of advice you've been given?

Don't take it too seriously. People do become self-important, especially comedians because you perform on your own in front of thousands people. You can start to feel invincible when, actually, you're just telling jokes to a very small amount of people, relatively, in the world. Just remember: you're doing comedy because you didn't study at school. 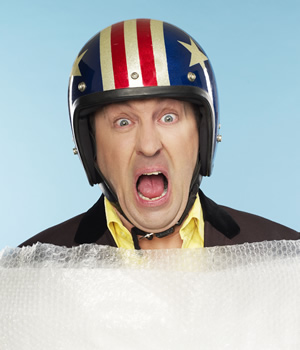 When did you sit back and think: I'm pretty good at being funny?

Comics never think that. They always think they're one gig away from never working again, which is why they're all paranoid lunatics. There is the saying, that you're only as good as your last gig... and it's true. You can do thousands of shows, but if you have one ropey night, you go 'ah, I'm not funny anymore'. It's the make-up of the comic. The voice saying 'you're not funny' makes you try to prove you are. That's a deep answer isn't? It's a load of rubbish [laughs].

What's been the lowest point? Have you had many nightmare stand-up moments?

Loads. The worst was when some family members came to see me perform at Stoke University. I died on my arse, was slow-clapped off stage, the lot, and they must have looked at me and thought 'you're not a comedian, you've been lying to us'. You just keep going and you end up being in the job for so long that you don't know any different. Next year will be 20 years since my first gig - how the hell did that happen? It's a crazy escalation of events, when all I wanted was to get up at my local pub and get 80 quid for 20 minutes.

Comedians get in trouble every now and then and are accused of going too far. Have you ever said anything controversial and, if so, do you regret it?

I've been included in things. My name was mentioned in articles about how disgusting people were at The British Comedy Awards, but I haven't been caught up in a Russell Brand-esque scandal yet - touch wood. I think it's a silly game that people play: there's a branch of people that pretend to be offended when they're not really, then there's a bunch of people that go 'alright, if they're going to be offended, I'll offend them'. Newspapers need to be filled and if someone swears it'll fill a quarter of a page nicely.