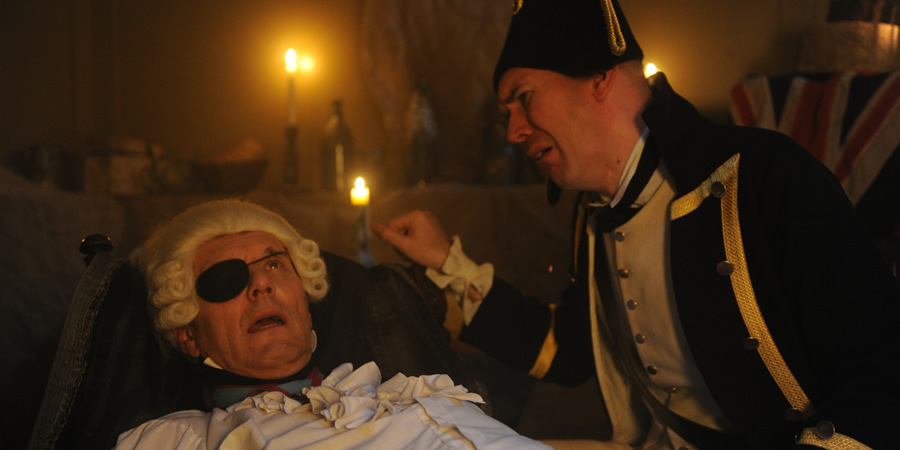 Sarah Alexander and Brett Goldstein appear in The Virgin Queen narrated by Ellie Taylor. And Joe Lycett tells his version of the Battle of Trafalgar starring Anthony Head.
Preview clips

When I come home completely wasted after a night out, my absolute guilty pleasure is to secretly prepare a slowly braised British pork belly with minted pea purée and smoked apple crackling which I then smash into the ground with my fists because I am a vegetarian.

If a good drunk is someone who doesn't rent a Nissan Micra and fill it with half a dozen hoes, then I am not a good drunk.

There was this hilarious time when I got into the back of an Uber [taxi] on my own after a glass or two of Chataeux-neuf-du-pape and gently stroked the driver's neck and thighs. It was so lol.

I would be myself 10 minutes ago. Don't ask me what I was doing 10 minutes ago but it involves a pigeon and a bag of poisoned crisps.

Young Stalin. Because he was fit.

To when young Stalin was taking a bath.

There's nothing secret about nuts.

Good - just like to be gently merry, not bladdered (favourite tipple: tequila, the only euphoric) because I prefer to laugh than watch the room spin - or throw up.

Not exactly the funniest - on a 21st birthday, somebody thought it would be fun to buy me as many whisky & cokes as I was old - I got to eighteen before I had to be carried out of the pub. My girlfriend at the time was not happy - she had planned an evening's celebrations. I was just ill.

Celebrating my daughter's 21st birthday in NY, I finished off my partner's very strong margherita - just... one... too... many. Got the giggles as my other daughter was very seriously trying to confirm our flight back to LA. Silly giggles. One daughter getting crosser, the other finding it very funny and videoing it. Just could not stop laughing, crying with laughter - decided I'd like to go to Munich instead.

Leonardo Da Vinci - I'd just like to have a feel of what it must be like to have that mind and that talent. Wouldn't have to be for long, I might not be able to cope.

Oscar Wilde - to bask in that wit for a while, although I'd probably struggle to keep up.

The building of Stonehenge - how the hell?

Joe Lycett tells his version of the Battle of Trafalgar.

Joe Lycett suggests the Battle of Trafalgar was a bit like Battle Ships.