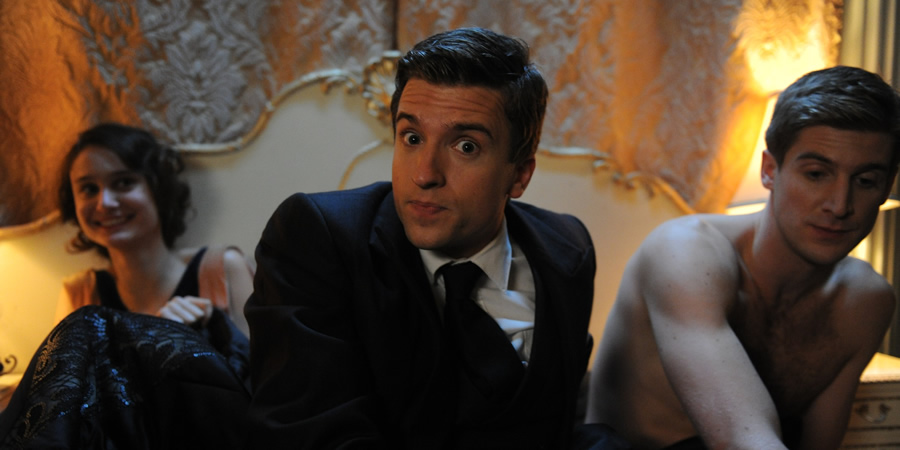 And Isy Suttie tells her version of Prince Edward and Mrs Simpson starring Greg James and Sophie McShera, with Jimmy Carr providing the voice over.

I had a wee through the letterbox of an Ottakers.

I'd be Churchill. He was good at announcing stuff on the radio. He knew how to hold an audience. I could learn a thing or two.

Henry VIII. I'd like to share a gammon with him. And advise him not to have too much therefore avoiding gout.

I'd like to have a go on Lenin's train in Russia. Just think how fun it would be. I wonder if he ever asked to drive it? I would.

Can you tell us a bit about the character you're re-enacting in this episode?

I'm part of the escape team, and that's as much as I know! I think I'm tunnelling tunnels, but we'll soon find out!

Dressing up as a kid was the best thing in the world, so when you get to do it as an adult, it's the coolest thing. I'm super excited to start escaping!

Have you seen clips of the drunk comedian narrating your story?

I've heard the clips but haven't seen the footage. The great thing about this show is that they actually do get drunk! I heard that Ed was really drunk.

Weirdly, as a small guy, I can actually hold my drink. I think University teaches you how to drink. I get drunk very quickly but then I just stay a certain drink.

What are your favourite drunk munchies?

I'm not one of those people who will eat a kebab when they're drunk. I really like salad cream - mini Scotch eggs and salad cream!

If you could be one historical figure, who would it be?

I would be Shackleton, because he's an explorer and what's better than that. Being an explorer would be the coolest thing in the entire world because you're discovering new places and new things and everyone loves treasure hunting. I love adventures and he was the biggest adventurer.

Who would be your dream person to share a pint with from history?

Probably Shackleton or someone weird like Hitler would be super interesting. I imagine he's a super eccentric person. He also had great style and that's something not a lot of people know.

If you could go back to one moment in history, when would it be?