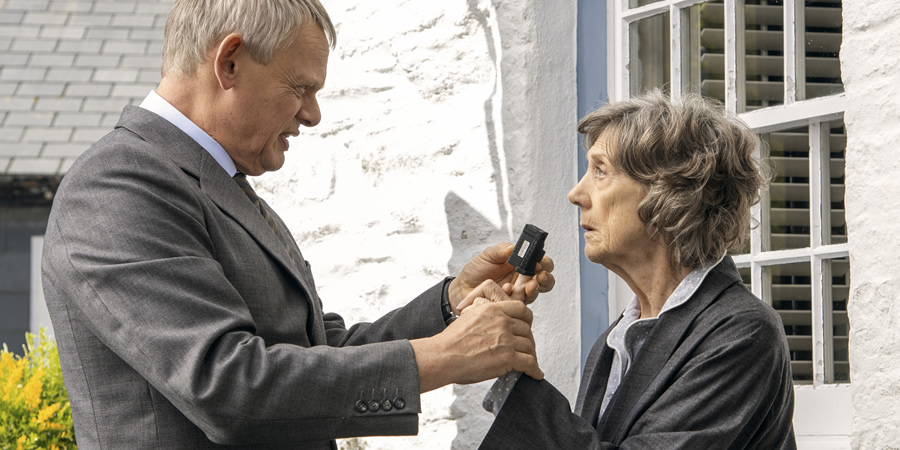 Ruth is concerned about becoming increasingly forgetful, and is even more perturbed when Martin offers to perform a mini mental state examination. Meanwhile, Louisa plans a special evening to celebrate Martin's birthday, and Al decides to throw Morwenna a surprise engagement party on the same night.

Ruth is concerned about becoming increasingly forgetful; leaving the front door open and misplacing her purse. She is even more perturbed when Martin, worried about her health, offers to perform a mini mental state examination, which confirms Ruth is showing early signs of dementia.

On top of her health worries Ruth also has an annoying neighbour, Paula, who's an animal lover. Since she's moved in there is a nuisance of cats hovering around her house, and a strange sound keeping her awake at night. But is Ruth imagining things, and could there be another reason for her forgetfulness?

It's Martin's birthday and Louisa has planned a special evening to celebrate, even though he says the Ellinghams don't do birthdays. Al decides to throw Morwenna a surprise engagement party on the same night, in an attempt to propose to Morwenna properly. PC Joe Penhale takes on the duties of organising the engagement party, but only if Al promises him he can be his best man.

Louisa has an important class presentation, as part of her tutorial group. To give it more of an informal feel, her tutor Professor Sam Bradman has decided the person presenting will host the group; this week it is Louisa and Tony.

The session doesn't go quite how Louisa hoped when a classmate is allergic to Buddy, another is upset by her presentation and Tony is diagnosed with Cushing's Disease when he accidentally wanders into Martin's Consulting Room.

The engagement party doesn't go to plan either. Mrs Tishell hi-jacks it as Martin's birthday celebration, presenting him with a birthday cake and making a speech. Then as Martin and Louisa leave the pub to have their special birthday meal Penhale accidentally whacks the door into him, knocking him to the floor.