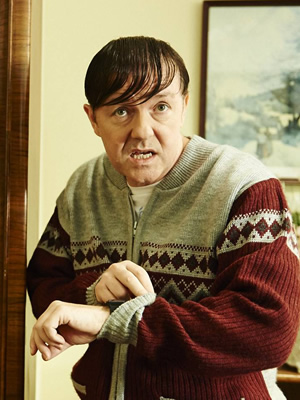 Writing on his blog in June 2014, Ricky Gervais had this to say on the topic of whether his character Derek is disabled...

I'm not sure if anyone who doesn't follow me on Twitter or Facebook still reads this rather quaint and archaic blog, but just in case, I'd like to thank you all for your support, loyalty and wonderful comments about Derek over the last few months.

However, it hasn't always been plain sailing. I give you "The Derek dilemma."

There would be no actual change in the fictional character or the programme in which he exists. The only possible change would be in people's judgement of the show. Or rather, let's be honest, in their judgement of me.

Many made up their own mind about Derek's "condition". Most made their decision before they'd even seen the series. I even had time to explore that question in the show itself because of all the assumptions flying around months before it had been written. Not once had I suggested that Derek had any disability. In fact I have explained hundreds of times in various interviews that he does not.

Still the assumption persists. Often through malice, sometimes through ignorance; but often, and here's the really tricky bit, as praise.

Derek, because of his positive message, sweetness, honesty, and inner beauty, has become a pin-up boy for autism. Initially this gave me a dilemma. I couldn't suddenly pretend he was always meant to be autistic and embrace the flattery. However I was really touched by the fact that people identified with him on a personal level.

But here's the thing; Derek WAS meant to be different. He was meant to be marginalised by society. He was meant to draw assumptions by uncaring, thoughtless people who needed to label and pigeonhole individuals for their own peace of mind. He was meant to surprise and undermine stereotypes. And he was meant to look odd, speak funny, have bad hair and no fashion sense and not give a fuck about such things because he knew they weren't important. He knew what was really important. Kindness.

He is a hero. He is a hero of mine and I welcome him to be a hero to anyone else. Disabled or otherwise. Popular or ostracised. Derek is not meant to be autistic, but if anyone sees traits that they identify with then so be it. However different you are, it's nice to know there's someone a bit like you.