Broad Hill Retirement Home is planning to host a cabaret show and Derek has formed an entertainment committee to discuss plans for the evening.
Preview clips 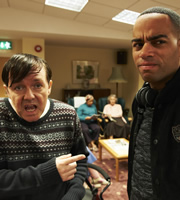 Derek has decided he wants to do a ventriloquist puppet act for Broad Hill Retirement Home's cabaret show, whilst Kev announces he wants to make a play of the Duran Duran film script he wrote in '98 that never got off the ground. Dougie questions however whether it can actually be referred to as a 'film script' when it's only three to four pages long and illustrated with phallic drawings!

There's a new community service worker starting at the home today who goes by the name of Deon. He's a keen rapper but the elderly residents aren't exactly the type of audience he's used to. Derek shows Deon around and takes him to meet Dougie who is less than impressed with his rapping ability and when Deon tries to claim that he's different from other singers, Dougie shoots him down.

Later that day, Deon meets Vicky and the pair flirt with each other whilst establishing a common ground over the fact they both got caught nicking shoes. Deon's beginning to settle in and decides that although it smells like Oxfam, Broad Hill is a better option than prison as there's no physical threat and if necessary he could beat up anyone in there.

Derek's put himself in charge of casting for the cabaret and tries to convince Deon to be part of the show but he declines. Kev and Derek then go around sourcing costumes and wigs for their Duran Duran tribute act by rummaging through some of the elderly residents possessions.

It's the night of the show and Kev has chosen to host. Derek is first to take the stage with his ventriloquist act, although he appears to be using the puppet more like a glove than anything else. Elderly resident Joe sings and then it's time for the big Duran Duran finale - Boys on Film written and directed by Kev.

Unfortunately for Dougie he is needed to step in, despite protesting he doesn't want to be involved, as another of the band members is taken ill.

As the boys step on stage, there is a lot of confusion on Derek's part as to whether his character is Duran Duran or Simon Le Bon but once that's been established the band can start to perform... Finally, Deon makes a welcome return with a special heartfelt rap.

The retirement home is having a cabaret show. Derek becomes a ventriloquist.