Derek decides to sell some of his autographs in order to raise money for the retirement home. Meanwhile, an outing to the beach for some of the residents means a blissful afternoon in the sunshine.
Preview clip 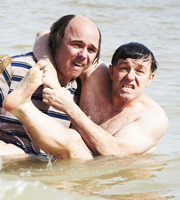 One of Derek's favourite hobbies is autograph hunting but he's decided to sell some of his autographs in order to raise money for the retirement home. Kev, Dougie and Derek head to a local shop that sells autographed photos of iconic celebrities to see how much they can get. The shop assistant however isn't overly impressed by the signatures Derek's managed to collect - the main reason being, Derek can't actually remember who a lot of them belong to.

Kev also has some autographs he'd like to sell including a signed photo of him and Baby Spice, a Katie Holmes signed Harvester pub menu and a signature which he claims belongs to the one and only Uncle Ben. But the shop assistant struggles to believe that Katie would ever visit a Harvester pub or that Uncle Ben is in fact a real person and the boys leave empty handed.

Another of Derek's passions is wrestling. He often pounces on Kev and Dougie unannounced and wrestles them to the floor trapping them so they can't move. "I loves wrestling because I'm strong and grabby" says Derek. "In real fighting you fights people what you don't like so you can hurt them but in wrestling I wrestles people what I do like. It's like strong cuddling really."

Today, some of the residents at Broad Hill Retirement Home are going on a trip to the seaside whilst Hannah stays behind to register a new resident. Dougie drives the mini bus but finds it very hard to concentrate with Derek sitting directly behind bombarding him with questions such as; "What would win out of aids and rabies?"

Back at the home, new resident Mrs Shaw arrives accompanied by her daughter Rebecca who recognises Hannah from school. Rebecca is a well-dressed successful woman who can't help but make remarks about the fact Hannah left school at 16. Her comments leave Hannah wondering whether her life has really turned out as she intended.

At the beach, the residents relax whilst the boys have a paddle in the sea but before they leave - Kev makes sure he's made his mark by writing rude words on crabs with a marker pen.

On their return Hannah couldn't be happier, as she's had enough of Rebecca's snide remarks, and it makes her realise just how much she's missed everyone's company.

The bus stops for a comfort break.