It's a day like no other at Broad Hill retirement home. Derek is watching Dougie fix a table's wobbly leg until he finds a baby bird that's fallen from a tree.
Preview clips 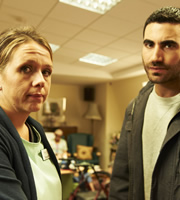 It's a day like no other at Broad Hill Retirement Home. Derek's watching Dougie fix a table's wobbly leg... until Kev strolls in with his most recent and slightly 'larger than life' sexual conquest! "Derek, don't ask any questions," says Dougie as Kev begins to go into great detail about the night's events.

Later that day, Dougie is tidying up outside whilst Derek is seeing what wildlife he can discover in the garden. He comes across a toad which Kev cruelly convinces him to lick and it's no surprise when Derek says it tastes "orrible." He then finds a baby bird fallen from a tree and is desperate to save its life.

Derek rushes inside claiming there's an emergency and asks Hannah to call Rolf Harris or Bill Oddie. When she explains she doesn't have their numbers however, Derek decides to call an ambulance himself.

Tom stops by to collect Hannah for their long awaited date only to find that she's forgotten all about it so can't get out of work. This isn't the first time Hannah's let Tom down and she's starting to worry he might lose interest. Meanwhile, Derek and Kev are busy making fairy cakes to raise money for the retirement home at the local jumble sale whilst Dougie oversees. As Derek and a few of the residents go off to the jumble, elderly tenant Marg receives a visit from her obnoxious daughter Shelly - who's desperate to get her hands on Marg's engagement ring.

When Derek returns, he is thrilled that he's managed to buy an identical 'friend' for his favourite ornament frog. What he fails to understand however is that he's used his money to buy back the original ornament frog which Dougie had got rid of.

Hannah finally gets the opportunity to go on a date with Tom but before they get a chance to sit down, Marg is taken ill and Hannah has to rush back to the home. Hannah remains by Marg's bed side as she slowly slips away - but not before offering Tom her engagement ring when Hannah's steps out of the room.

Derek has found an ill bird.

Kev has found a new partner.