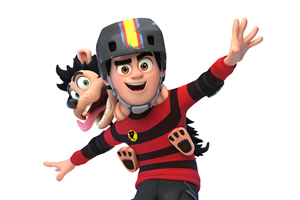 Dennis is Beanotown's spiky-haired master of mischief and mayhem. He's always getting into scrapes and battles with people who get in his way but he knows that life is all about going on adventures and having fun with his mates!

Dennis hates living by other people's rules, especially school rules, which get in the way of his live-in-the-moment attitude.

Dennis has an inimitable sense of fun where imagination knows no bounds. He is mischievous but has a heart of gold and is loyal to his best friends Gnasher, Rubi, JJ and Pieface. He loves riding his skateboard and playing in the Dinmakers, Beanotown's loudest garage band. Dennis is the singer and lead guitarist, with Rubi on the synthesiser (she made her own), JJ on drums, Pieface on bass guitar. Gnasher dances (and he likes to shake his maracas from time to time). 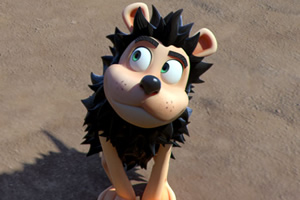 Gnasher is Dennis' pet dog and his best friend. They're completely inseparable. Gnasher even disguises himself as Dennis' backpack so he can sneak into school.

Gnasher is brave, loyal and is the perfect dog for a boy like Dennis. They both love adventures, pranking, hanging out with their friends and having a blam time!

Dennis is also the perfect boy for a dog like Gnasher, because he doesn't mind getting into scrapes, getting muddy or running away from people whose sausages have been eaten from under their very noses. 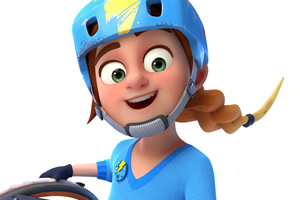 Rubi's name is actually Rubidium von Screwtop. She is the group's techno-whizz and budding inventor.

Sharp-witted and quick-thinking, Rubi doesn't let anything hold her back, racing ahead on adventures and kitting the gang out with the best devices along the way.

She is logical and brings a sensible perspective to some of the scrapes the friends find themselves in, making sure that Dennis doesn't get carried away with one of his 'really dumb plans'.

Rubi uses a wheelchair to get around Beanotown. She can pull really cool stunts in it and she loves to hack and customise it to make it unique. 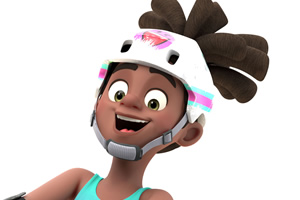 JJ is the boldest best friend a kid could hope for, with a no-nonsense attitude.

Fast, strong and enthusiastic JJ is the perfect match for Dennis in his unending quest for adventure. She is fearless and strong, and if there's something she really wants to do, or which she believes is the right thing to do, she will make sure it happens.

She relates stories to the gang which her older brothers have told her, stories which might not always be the absolute truth. JJ likes to get around on her BMX, which she loves because it's really fast, and she can do loads of freestyle stunts on it.She also carries a device in her wristwatch which helps her to zip-wire into places. 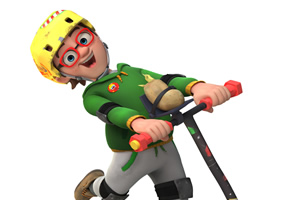 Pieface's real name is Peter Shepherd but he is called Pieface because he loves pies. Big pies, little pies, meat pies, fruit pies, mud pies and even pie pies - he loves them all!

Pieface often says things which don't make a lot of sense, but everybody loves Pieface because he's gentle, kind, funny and he likes to make people happy. He has a unique perspective and seeing things differently comes in very useful sometimes.

Pieface has a pet potato called Paul. Pieface says Paul is very clever and they often have interesting chats about politics, history and Paul's secret life as a superhero, though no-one else has ever heard Paul speak. 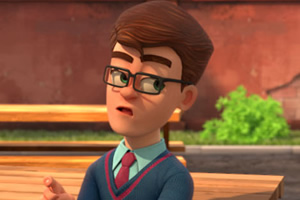 Walter is still Dennis's arch enemy and a constant irritation to the gang.

His love of rules and hierarchy are always at odds with the gang's thirst for adventure and excitement. Grown up before his time, Walter loves the established order - not least because his father is the mayor and he enjoys all sorts of perks and privileges because of that, including avoiding the school dinner slop that all the other kids have to eat.

Along with his craven side-kick Bertie, Walter goes out of his way to find out what the gang are up to and stop them in their tracks. He never misses a chance to get Dennis into detention for breaking one of the hundreds of school rules and is not above cheating if he finds himself in competition.