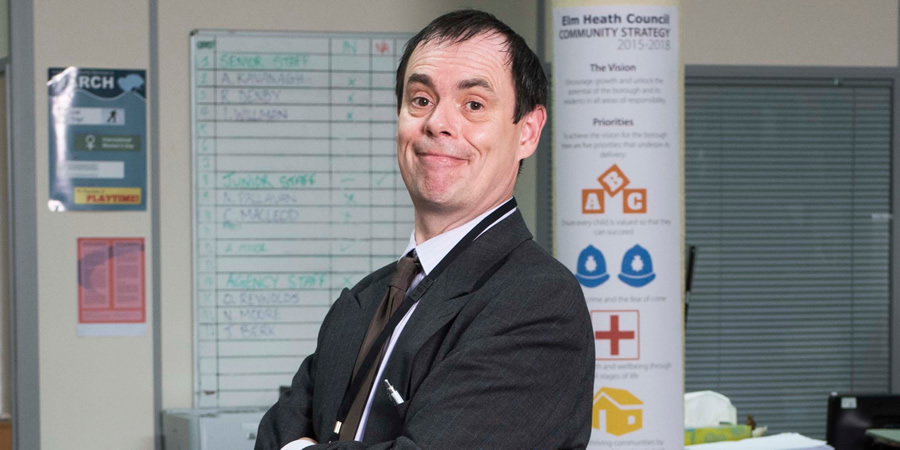 Kevin Eldon says it was nice to play a character who wasn't 'the weirdo' or 'scary bloke', just a ruddy nice man...

Tell us a little about your character...

Martin has worked in social services since he left university. He's like a lot of people who work in social services: He's certainly not doing it for the money and the easy hours. He's got a good social conscience and a basic yearning to 'help out'. One of those people that would do anything to lend a hand if he could, to friends, family and strangers alike. We need more Martins, I reckon.

What was it about the project that particularly appealed to you - why did you want to be a part of it?

There are a few reasons for wanting to get involved. One is that I've known Jo and Alan and Morwenna for a long time. It's always lovely to work with your mates. I also already knew Isy and had worked with Georgie before. So there was a social aspect. And then it was lovely to meet Himesh, who, incidentally, is terrific in this; as well as some other new people.

I also thought the subject matter was a draw. The thing about the scripts is they've got heart. There's nothing cynical or mean about them. It's about good people trying their best against pretty heavy odds. At the same time I think it avoids the trap of getting too cloying or sentimental. The characters are flawed like real people. Their flaws often make them more attractive, I think. Also, as far as Martin is concerned, well I often get 'the weirdo' or 'scary bloke' and it was a refreshing change to get to play somebody who doesn't have a bad bone in his body. In fact that's Martin's flaw sometimes, he's too ruddy nice!

Social workers often get a bad rep in the press - do you see Damned as a sort of response to that? As a means to humanise the profession?

Well, there is a large section of the press that does exactly this, if you'll excuse a not unreasonable sweeping generalisation. They drum up a bad reputation for people who don't deserve it and big up people who should be censured. If not actually imprisoned. So I say that, chances are, if you've got a bad rep in the press you're quite possibly doing something right.

Social workers work in a legal, moral, psychological minefield. Poorly-resourced and massively over-worked. That's pretty obvious, isn't it? So I reckon they need support and gratitude rather than sniping and contempt. That's not to say that there can't be oversights and incompetence on their part. And of course when that happens the responsible parties should be called to task. But as outsiders to the massively complex layers of sheer stuff they have to work with, and through, I think we shouldn't be too quick to judge when something goes wrong. Or too simplistic in our conclusions.

It doesn't make headlines when they do their job well, does it, when they protect vulnerable people and help pull the discarded out of deep holes? You work for Morrison's and you make a mistake, as humans do, then there are going to be some smashed gherkin jars in Aisle 4. You work as a social worker and you make a mistake, as humans do, then the consequences can be real suffering. No pressure, eh? So I say, yes their job is vital enough to need constant regulation and accountability but also they need all the help and support, financially and otherwise that they can get. I bet most people trying to do their job would go bonkers in a week.

Martin, though a regular in the office, isn't technically an official member of the team is he...? Why is he there?

Safe to say that he's been going through a bit of a hard time recently. All stress-related. Which is very much a common experience when working in this field. He shouldn't really be there in the office. But his job is his life. It gives him identity and a feeling of self-worth.

Do we explore much of what happened to Martin as the series develops?

A little bit. Nothing too hectic. I mean, he wasn't kidnapped by aliens or anything. Unless the writers have kept that back from me.

Have you ever worked in an office before?

Many, many years ago. I worked in a bank and for the civil service. It did bring back memories of routine, rules, hierarchy, gossip, vendettas and falling behind with the tea fund. Oh, happy days. It was different then though in many ways. One was that in the late 70s it was obligatory to go to the pub most lunchtimes and have at least two pints of lager and lime. And you could smoke in offices then.

So my memory of the afternoons in the bank were of trying to tot up the wheelbarrow full of pennies brought in by the bloke from the amusement arcade whilst slightly drunk and coughing on my 15th embassy regal of the day. I got the sack from the civil service. Whilst working in a Job Centre. I am inordinately proud of this.

The series is lucky enough to have many comedians and comedic actors in the cast - what was the atmosphere on set like?

Awful. Very competitive. You couldn't trust anyone. Everyone just out for themselves. I'm joking! It was lovely of course. We all got on sickeningly well. Director Ian Fitzgibbons is a ball of focussed energy too so he kept the pace going and stopped us all from just basically spending the day lounging around nattering, which was not really what we were there for.

It's great, for example with Alan and Jo, we've known each other since the early 90s and the stand-up circuit when we were young and crazy cats whizzing from mad gig to mad gig. Now we can sit and blether quite contentedly about our kids and all that grown up stuff. Terribly wittily though, of course.

There was the opportunity for lots of improvisation while filming too - is that something you particularly enjoy doing? What do you think it brought to this particular series?

Impro is good fun. You have to be cautious with it, because what seems terribly funny on set on the day may lose a lot by the time it gets to the edit suite. But that's fine. You have the pre-written script to work from and then if a bit of improv brings anything extra, then so much the better. The general vibe of the series is fly-on-the-wall, so improv can sometimes bring a bit of naturalism into it from another direction. It's a funny thing is improv, if the mood is on you you can come up with some pretty good stuff. On another day, the lamest rubbish. Pretty good stuff is the preferred outcome.

I'm just finishing writing my third series for BBC Radio 4 so that's my main focus at the moment. And bits of this. And bits of that. You know how it is, darling!