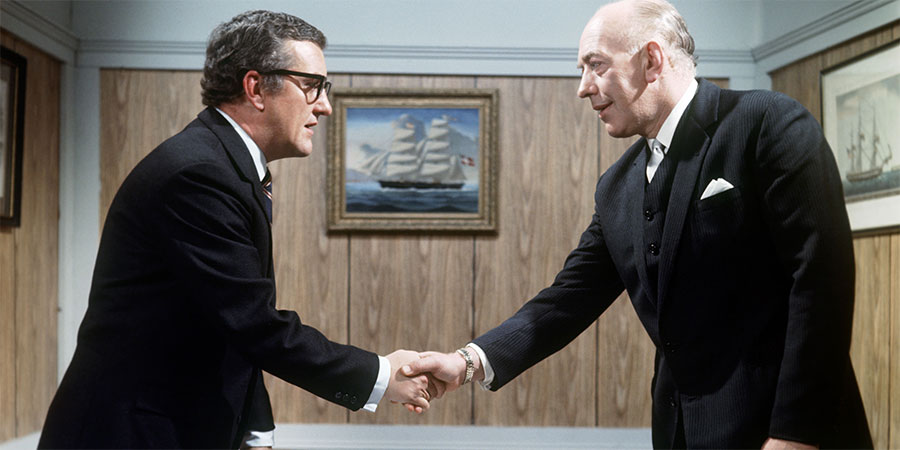 Early in 1965, singer and actor Bernard Cribbins was awarded his own self-titled comedy special on BBC Two, teaming up with Hattie Jacques and Peter Cushing for 45 minutes of now-wiped entertainment.

Perplexingly, although perhaps in part dictated by his busy schedule as a much-loved supporting star in many a British comedy film, it was not for another four years that he would return with his own full comedy series - this time on ITV, courtesy of Thames Television.

Running for two series from 1969, this latter Cribbins was a popular hit, mixing sketch and song - including his smash hit singles The Hole In The Ground and Right Said Fred, alongside a few lesser-known treats.

Written by Johnnie Mortimer and Brian Cooke - then enjoying huge success with Horne A'Plenty and Father, Dear Father - the 12 episodes put Cribbins's comic talents front-and-centre, placing him in a range of comical situations and inhabiting a wide range of oddball British characters.

Across its run the series welcomed guest stars such as Dennis Price and Patrick Cargill, plus an appearance by Bill Pertwee.

It also saw Cribbins paired with a range of great supporting actors of his own. Notably, Bob Todd appeared across both series, with Madeline Smith and Carmel McSharry also lending a hand in Series 1, and Sheila Steafel and Tim Barrett working their magic in Series 2.

The whimsically funny series remains testament to Cribbins's significant comedy skills, and ability to carry a comic plot as a leading man rather than in the supporting roles in which he was usually cast.

Cribbins - The Complete Series is available to own on DVD from Monday 10th September 2018.

Comedy legend Bernard Cribbins had been a key presence in British film and television comedy for over a decade before he landed his own headlining television series at the tail-end of the 1960s. An off-beat revue of quickfire sketches in the "Cribbins style", this fast-moving mixture of comedy and song (including chart hits The Hole In The Ground, Gossip Calypso and Right Said Fred) featured a gallery of outrageous characters in a myriad of seemingly inexhaustible situations! Bank clerk, burglar, tramp, librarian, cowboy and even spaceman - Cribbins is these, and much more!