Comedy legend Bernard Cribbins had been a key presence in British film and television comedy for over a decade before he landed his own headlining television series at the tail-end of the 1960s. An off-beat revue of quickfire sketches in the "Cribbins style", this fast-moving mixture of comedy and song (including chart hits The Hole In The Ground, Gossip Calypso and Right Said Fred) featured a gallery of outrageous characters in a myriad of seemingly inexhaustible situations! Bank clerk, burglar, tramp, librarian, cowboy and even spaceman - Cribbins is these, and much more! 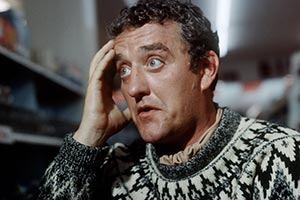 Sketch show Cribbins is one of the focuses of British Comedy Guide and Network's September 2018 Month of Comedy.