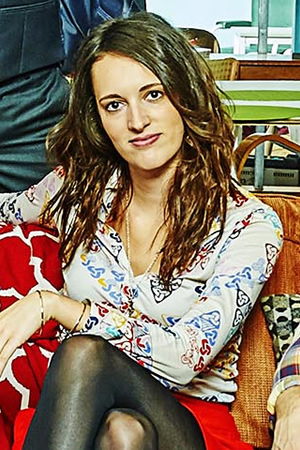 Crashing crashes into the lives and loves of six twenty-somethings living together as Property Guardians in a massive disused hospital. In amongst the asbestos an abandoned x-ray machines live sexually explosive estate agent Sam, frustrated French artist Melody, shy and excitable Fred, and happily engaged couple Anthony and Kate. It's practically peaceful. That is, until the spontaneous arrival of Lulu, Anthony's oldest and least responsible friend. Creator Phoebe Waller-Bridge explains more...

What's Crashing all about?

It's about property guardians. Anthony, Kate, Sam, Fred and Melody are young professionals who desperately want to live in London and have to for their work, but can't afford normal flats so they're living in a disused hospital. Just when they think they have found a version of peace there, Sam demands a party and Anthony's oldest friend Lulu arrives...

It's really about their lives and loves and mistakes and confusion and pain... mainly their pain!

Why did you decide they were property guardians?

It was very serendipitous. I already had Lulu, Anthony, Sam and Fred from two short plays I'd written. Josh Cole, the show's producer, came to see it at the Soho Theatre and suggested developing the characters into a series, but we couldn't justify housing these people in a big plush flat as it's just not believable these days. Down the road from [production company] Big Talk we discovered a huge disused hospital occupied by property guardians, so we investigated that a bit and thought, this is actually what real people are doing now; perfect!

Would you thrive in that environment?

I would have done in my early twenties, when I had more room in my life for baths exploding and walls falling down. Actual property guardians told me that they adapted so quickly that things like that became business as usual. Only after they leave do they look back and go: my God, I can't believe I lived like that for so long.

Were you already thinking of doing more with the characters from the plays?

Definitely. The stimulus to write the plays was to find the moment something exciting could have happened between two people, but doesn't because they bottle it last minute. I always wanted to write about what happened to these people after this moment. Crashing is about how they live with it hanging perpetually in the air and how the characters have to dance around it and pretend it never happened.

How helpful was working with Jessica Knappett on Drifters?

I called her up constantly about Crashing. Writing on Drifters was so fun, mainly because she'd done the hard structuring bit and I just did the fun bit which is writing the dialogue. Seeing how strong she was about it all, making big decisions about her show, was inspiring. 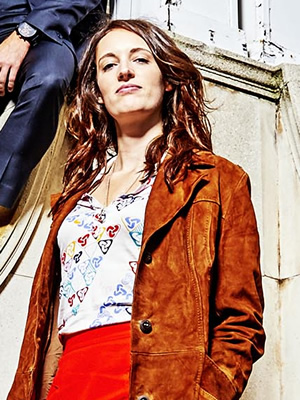 You play Lulu - how would you describe her?

She's a foolish optimistic who believes it's totally fine to just rock up somewhere and expect to find a job and a place to live in seconds. Infuriatingly she does land on her feet each time. She fancies herself as this spontaneous rock 'n' roll ukulele chick, but eventually has to work out that that isn't actually a thing...!

I think she is in the moment, but overall, no. If she stopped to think about her situation, she'd get very depressed. She's lonely and scared and wants to be taken seriously without having to grow up. And she doesn't say how she feels, and anyone who does that is going to crumble eventually.

How close are you to Lulu?

The instinct to try and make everything fun is in both of us, and I recognise the time in my life when being cool and edgy was a priority. I failed disastrously because innately I'm a goofball.

Which memories make you cringe?

So many moments. Fashion disasters, wearing fluffy Lycra outfits because that's what people were wearing in school. That and pretending to be into horrible bands that I secretly hated. It was an exhausting stage of growing up.

Sam comes across as the archetypal dickhead.

He's massively energetic character who wants everybody's attention all the time, gets bored very quickly and likes being controversial. Those people are electric to be around but exhausting in real life. He's distracting himself from a bereavement and confused about who he thinks he is and wants.

And he connects with Fred, who seems very sweet.

Fred's a genuinely good person with a very clear moral compass. He hasn't been noticed much in his life: he's just bobbed along, laughing at everyone's jokes and helping clear up after dinner. He's never been looked at by somebody like Sam before, let alone had a conversation with them.

And Anthony's in a dilemma.

Yeah - he's cool, intelligent, knows what he wants, has an interesting job, yet he has so many insecurities and fears. He can't make a decision for fear of making the wrong one. He's been sitting on his feelings for Lulu his whole adult life, as she has for him. He's trying to be good, but then they all are. 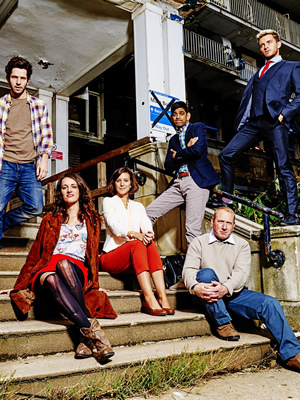 His fiancée Kate has life so planned out that she doesn't know how to react when things don't go her way.

Exactly - the big curveball for her was having to live as a property guardian. She would never have planned to, but she's smart and practical, knows she has to save for the wedding and the deposit so it was her idea to move in there. She's ambitious, not humourless but buttoned up - she's so close to getting her ducks in a row, then Lulu arrives.

Where did Melody come from?

I knew I wanted to write a very bored woman. Nothing has any consequence for Melody and she is, hands down, the most interesting person she knows. She's also very beautiful, which is a yoke around her neck because every man she meets is drooling all over her. Then she meets Colin, who surprises her by being different. So many property guardians are artists; it seemed like the perfect fit for Melody.

Colin is very different to the others.

Yes, he's in the hospital completely by accident. Recently divorced, utterly heartbroken... In many ways, being a property guardian is his living nightmare, but with the changes in his life he was up for trying something different. He's a gentle soul who knows himself far more than any of the others know themselves.

I know! I still can't get over it. We obviously auditioned her rigorously...

There was a collective in-take of breath when she was confirmed then I just hyperventilated for about an hour. We thought we had to try asking even though she doesn't really act any more... You never know. Working with her was one of the coolest days ever. She's beyond hysterical as Gladys.

Where do you think the guys will be in a decade?

Probably still desperately trying to untangle themselves from each other! I hope they'll find success in life. I'm sure Sam would prefer to live in a hospital all his life but I'd worry about Anthony, because he needs to have the right people around him and he might alienate them all. And Lulu? If she applied herself, I think her and her ukulele might surprise us in 10 years.