Series 1, Episode 6 - Head In The Clouds & The Newsreader

Stephen Mangan and Hugh Dennis narrate funny yarns about a newsreader interviewing an evil dictator and a care assistant who moonlights as a superhero. 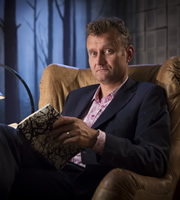 Stephen Mangan reads Head In The Clouds by Jason Cook.

A carer in a retirement home is also a crime-fighting superhero - but his elderly residents feel neglected and threaten to reveal his identity.

A newsreader has the opportunity to change history when he interviews a dictator who falls asleep with a gun poking out of his pocket.