Sharon Horgan and Charlie Higson read darkly comic tales. A translator changes the world order at a political summit and a young female motorist breaks down on Walpurgis Night. 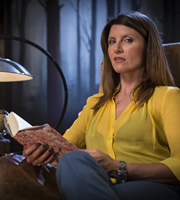 When a hungover Sabine accidentally mistranslates an exchange at a diplomatic summit, she realises she can influence world politics by being creative with her interpreting.

A woman is stranded in a layby after breaking down on Walpurgis night - a night of evil spirits and demonic forces.