Twisted tales read by Harry Enfield and Sarah Solemani. An office worker takes on a high-street coffee chain and a downtrodden librarian gains access to a CIA military drone! 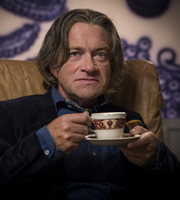 Harry Enfield reads The Teacup Has Landed by Nico Tatarowicz.

An office worker discovers he makes the best cup of tea in the world, threatening to undermine a coffee multinational's stranglehold on the hot drink industry.

A downtrodden librarian unexpectedly gains access to a top secret CIA site, and finds herself in control of military drone.