Rebecca Front narrates a story about a hack writer who finds a lost Bard play. Kevin Eldon tells a twisted tale about a man driven to insanity. 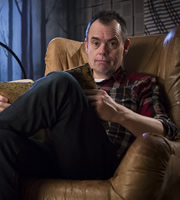 Kevin Eldon reads What Do You Say?, which he also wrote.

When an ungrateful man refuses to thank a helpful stranger, the strange man haunts him by persistently asking "What do you say?"