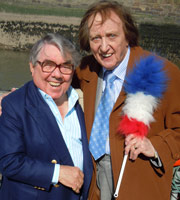 Firstly, Ronnie meets Harry Hill who shows him around his madcap prop store. Harry and Ronnie compare notes on their comedy styles. "I really love Harry's brand of joyous nonsense and it couldn't be further removed from my own approach," says Ronnie. "My comedy has always revolved around an exaggerated version of me and all my, well, shortcomings..." he continues. Unlike Ronnie, Harry reveals very little of himself. "It's really useful to have a kind of outfit you can put on and then you're at work, and then you take it off and you're back to being normal," explains Harry, who hides his true character behind glasses and a large collar.

Next David Walliams invites Ronnie to afternoon tea at his mum's. David and his mum Kathleen are very excited that none other than Ronnie Cornett is a guest in their home. "It's lovely to have you in our living room. In person," David tells Ronnie. "Because, well I grew up watching you for many years, right from the early 70s...We'd all enjoy you," he continues. "And here you are in the flesh. It's a crushing disappointment!" laughs David.

Ronnie jokes that he and David have something in common - they've both spent a lot of time dressing-up in women's clothes. David's mum reveals to Ronnie what David was like as a child: "He had a sister and he has cousins. Three girls... They used to go upstairs and work out little plays, and the girls would only let David be in it if he would wear the old net curtains... And somebody's old nightie and things like that," Kathleen explains.

David insists he never minded dressing up as a woman and, in fact, he feels his earliest comfort from being funny came when he appeared in a school play dressed as a female. "I played the Queen and I was stepping in for someone because it was an all-boys school, up until the sixth form, and some boy dropped out at the humiliation of having to dress as a woman... I remember fanning myself and just getting some laughs. At ten or eleven, thinking, 'This is good.'"

Also in this episode, Ronnie joins Rob Brydon for a round of golf, he meets Dara O'Briain in Kingston where he is given a tour of a small comedy club that Dara believes is the perfect comedy venue, and he goes to Liverpool and boards a ferry to sail across the river Mersey with the one and only Ken Dodd.

Before Ronnie's journey through comedy ends he has one very important place to visit - Studio 8 at the BBC where he and Ronnie Barker recorded The Two Ronnies. His iconic chair is still there and for old times' sake Ronnie asks viewers to sit back and relax as he retells one of his best loved monologues from the comfort of the most famous chair in comedy.

"I can barely believe that 25 years have gone by since I last sat on this chair in this studio," says Ronnie. "Brings back lots of very happy memories and of course sad ones cos Ron's not here anymore," he adds with emotion. "I count myself very lucky to have played some small part in the story of British comedy, and it's lovely to know that its future is in such safe hands."