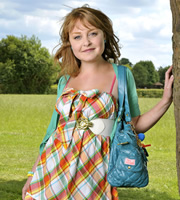 Chloe Wheeler is, on the surface, a quiet, well-behaved student who gets straight A grades in her college work... but she retains a worryingly psychotic side.

She's in a loving relationship with best friend Matt - although sometimes wonders if she's more his carer than his girlfriend! Slowly she begins to resent their intellectual disparity, and by Series 3 her frustration is reaching breaking point. This is highlighted when she sets up a Twitter account detailing Matt's moronic behaviour.

Chloe is prone to extreme mood swings, sometimes even resorting to physical violence. This is perhaps the result of her parents being just that bit too doting - she's appalled when they start offering detailed advice as she's about to lose her virginity.

Her interests include cuddly toys and world domination. 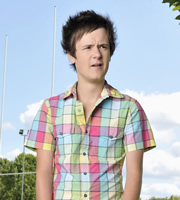 Matthew Cobbett is Coming Of Age's every man, or at least he would be, if every man had the IQ of Marmite (ironically, he hates Marmite).

Clinically stupid, he finds basic tasks such as doing up his coat a significant challenge, although he is very sweet natured.

Over the course of the first series we see him get together with his best friend Chloe, who he remains devoted to through-out Series 2. By Series 3 however, Matt has begun to wonder if there's more to life than being hit and told he's an idiot, and discovers an independence of thinking he didn't know he had... 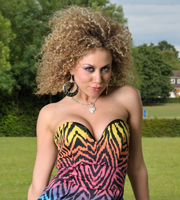 Jasmine Brown used to be easy like Sunday morning but put the brakes on her bed hopping days upon getting together with Ollie.

Clever, witty and, in her own words, devastatingly gorgeous, Jas is a force to be reckoned with. Passionate and volatile, she soon reveals an ambitious streak - she'd like to be a successful actress, and will put little in the way of achieving her dream.

Tiring of Ollie's behaviour, Series 2 sees Jas and Ollie spectacularly split up. Unlike Ollie however, Jas gets over it fast, and Series 3 finds her enjoying being a single young woman.

But when things start to go from bad to worse for Ollie, it's Jas who's the first in line to help him out... 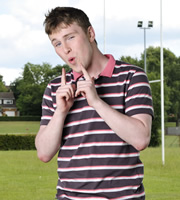 Oliver Maldwyn Sinclair likes to think that he is the brains of the group - which he probably is. Though to be fair, there's not much competition!

Pompous and arrogant, Ollie is always available to offer his friends advice on almost anything. He's also unashamedly Welsh and it doesn't take much for him to burst into patriotic song. He is the owner of the shed where the gang meet outside of college, and where he keeps his life-sized cardboard cut out of Jeremy Clarkson, which he often talks to in times of crisis.

In Series 2, he splits up with Jas and this has a profound effect on him. He struggles to cope with the rejection and by Series 3 has lost his position as leader of the gang and is starting to develop a problem with alcohol. 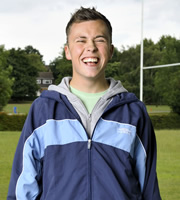 In any normal world, DK would be attending a special school, but thanks to the Government's education policy he is allowed to mingle with normal kids.

Cheeky, destructive, and with no self-awareness, his two great loves in life are sex and rapping. Sadly for him, he's never done the former, and can't do the latter. He's also extremely good at winding up teachers, much to the rest of the students' delight.

DK does however have a vulnerable side. He's actually incredibly sensitive and is instrumental in helping Robyn settle into the group. He also has a very unhappy home life, often referring to his mum, who is an alcoholic and a drug addict.

Despite his behaviour, DK loves Wooton College, and is reliant on the support of the Principal and his friends to stop him going off the rails totally. Which leaves the Principal in a very difficult position when DK goes a step too far in Series 3. 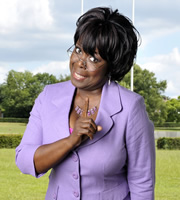 Principal Jane Reed is the rock on which the College community is built.

Smart and sassy - with a "hot ass that just won't quit" - she's always there to help her students through their problems, and is particularly tolerant of DK.

Perhaps the reason she's so compassionate is that she's obviously lived a life herself. She's a regular on the dating scene and used to be a Hells Angel.

Principal Reed clearly loves her job. When she gets promoted to Area Co-ordinator in Series 2, she can't return to the College and her students fast enough. But, as we discover in Series 3, even Jane Reed has a breaking point... 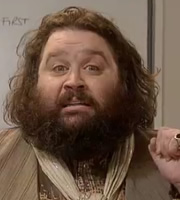 Wilberforce De Wilde is the College's music and drama teacher, and the regular butt of DK's practical jokes. He vehemently hates DK - and is always looking for ways to get him expelled.

Large though light on his feet, Mr De Wilde is a ball of neuroses and lust. He has a particular soft spot for the Principal, who he often accidentally calls 'mummy'.

He lives in a car in the college car park and is particularly proud of his pickled egg collection.

AKA: Robyn Crisp.  Played by: Minnie Ayres (as Minnie Crowe) 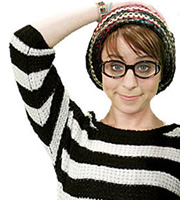 Robyn was introduced to the group through Matt, but soon develops a particularly strong friendship with DK, to whom she becomes a confidante. She also holds the dubious honour of being the first girl ever to visit his bedroom!

Series 3 sees Robyn trying to be accepted into the gang and working through her sexuality.