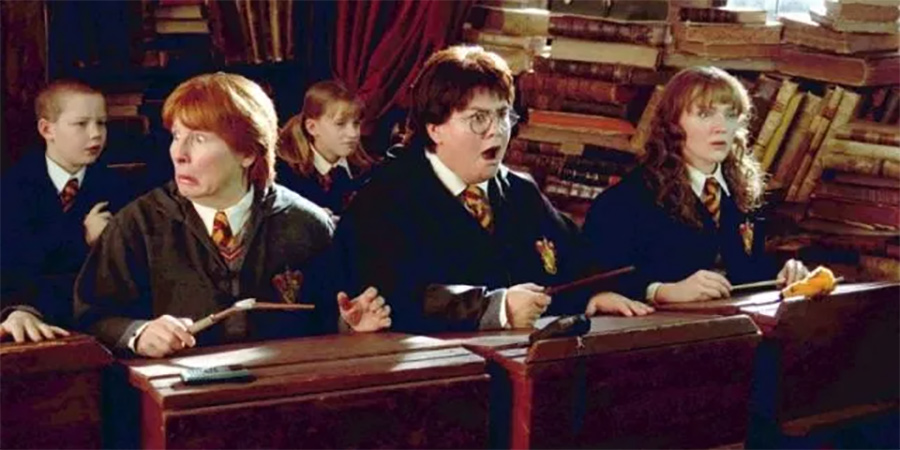 Since the now biannual Comic Relief charity drive launched in 1988, hundreds of comedians and celebrities have come together to do something "funny for money", creating a unique environment for all kinds of specials and sketches that simply wouldn't have happened in ordinary circumstances.

Whilst the fundraising in recent years may have seemed to deviate from comedy sketches somewhat, to list all of the charity drive's great comic moments would prove impossible. Instead, here we take a look at a mainstay of the Red Nose Day telethons: the all-star parody.

Comic Relief's movie parodies were popularised with a simplistic sketch from 1997, The Wrong Good Friday, which saw Bob Hoskins reprise his role from The Long Good Friday. This incredibly daft sketch (that really only comprises of one-line), became iconic in its simplicity. It had a timeless feel that many-a-sketch that builds up to one punchline has. The Two Ronnies' Four Candles sketch being the most obvious example.

The following Red Nose Day (in 1999) saw a more substantial parody. Rowan Atkinson brought back Doctor Who for The Curse of Fatal Death - a twenty-minute retro sci-fi pantomime full of maniacal laughs and Daleks. Steven Moffat penned the special, which saw Julia Sawalha star as the Doctor's companion alongside a myriad of special guest regenerations of the Doctor himself. Rowan's Doctor has grown weary of saving the universe, he's found someone to settle down with, 'a girl more exciting than an escape up a ventilation shaft.'

Facing off against Jonathan Pryce as The Master (with his special 'Dalek bumps') the pair battle across time and space, plugging every plot-hole they encounter with 'I'll explain later.' The sketch also presents us with the first ever female Doctor Who... Joanna Lumley.

Ironically, Moffat would later play a part in the genuine Doctor Who revival, which saw the series return to the BBC in 2005, where it has remained ever since. So, who knows, this special may have been more instrumental in Doctor Who's return than people might think.

However, the pair who really put the Red Nose Day parody on the map are the undisputed queens of the send-up - French & Saunders.

Dawn French and Jennifer Saunders were not only the pioneering female double act of the eighties and nineties, they also brought us what you might call the American-style-parody. Namely, a daft as possible shot-by-shot remake of a film of the moment. In a pre-YouTube and social media world, the duo always had their finger on the pulse of popular culture, and were able to hone in not just on what was popular at the time, but what was most likely to retain its popularity through the years.

It was this, coupled with their choices to parody timeless classics, such as, Gone With The Wind and Misery that proved a winning combination. By 1994 the duo's sketch show had become so popular that the BBC moved their series from BBC Two to BBC One, where bigger budgets allowed for more extravagant parodies.

By this time, the pair had almost entirely given way to devoting whole episodes of their sketch show to parody. No franchise was safe: Star Wars, The Lord Of The Rings, Titanic and even the classic Whatever Happened to Baby Jane?, which has been a perennial favourite of the double act for decades.

French & Saunders have contributed to Red Nose Day ever since its inception. They teamed up with Bananarama for two Red Nose Day novelty singles in the late eighties, but it was in 2003 that the pair created their first major parody for Comic Relief: Harry Potter and the Chamber Pot of Azerbaijan.

This was the early 2000s, the height of Harry Potter mania, and - as a result - parodies of the boy wizard were popping up everywhere. Alistair McGowan's Big Impression devoted an entire episode to one. McGowan played a "Louis Theroux" incarnation of Harry Potter, complete with Neil and Christine Hamilton as The Dursleys. Yet, it is this French & Saunders parody that has become the definitive wizarding world spoof. There was a huge amount of hype surrounding it at the time, it was the main event of Red Nose Day 2003 and it more than lived up to expectations.

French & Saunders were unafraid to mimic even the younger members of the Harry Potter cast - a savage parody of Rupert Grint's Ron Weasley, who can only communicate in screams and random noises, was a highlight. Meanwhile, Jeremy Irons took on Snape with a killer Alan Rickman impersonation ('sinister looks ... God I'm gorgeous!').

Most of the star turns bore an astounding resemblance to their in-movie counterparts, particularly Nigel Planer as Dumbledore. As always, French & Saunders are able to get to the nub of the issue, neatly pointing out the Harry Potter franchise's habit of side-lining great actors. In one of the duo's trademark "behind the scenes" sketches, we see the entire adult cast sitting around moaning about how they're not in the film much:

"They could have done me in a day," chirps Alison Steadman's McGonagall, "but they've kept me here for three years, and I haven't even got a caravan!"

We then cut to a montage where it's revealed that all Professor McGonagall ever really said in the films was, "What's the matter, Harry?" and "Sherbet Lemon!"

However, it's Ronnie Corbett that's this special's show stealer, as he plays, who else but... Hagrid!

There was something quite special about this spoof. Whether it was the daft dramatic movie trailer voice over that kept randomly throwing in surreal lines ("Coming up next... drama, intrigue, another wide shot of the great hall") or Jennifer Saunders' outrageous J.K. Rowling send-up ("Everybody knows I wrote all the Harry Potters on the back of some baby wet wipes.").

It's true that French & Saunders do always come down quite hard on their source material. But they do it in such a charmed way that they manage to get away with it. They seem to be able to dodge that inevitable problem with the genre of parody, which is that it naturally becomes dated. There's a timeless quality to this one, all things considered, it could have been created yesterday.

The success of the Harry Potter spoof kick-started a movie parody trend within Red Nose Day that has endured to this day. Riding high on this success, the following Comic Relief, French & Saunders gave way to Rowan Atkinson for The Spider-Plant Man.

Who wrote Spider-Plant Man is not credited (as is often the way with these fundraiser sketches), however the original idea came about when some of the Blackadder team thought about reviving the sitcom, as they periodically do. One idea that they came up with was 'The 'Batadder' - a superhero incarnation of Blackadder, complete with Baldrick as a Robin style sidekick, although that idea didn't get anywhere, it did eventually mutate into this sketch.

In a parody of Sam Raimi's Spiderman movies of the early 2000s, Rowan Atkinson stars as The Spider-Plant Man. He finds himself facing off against an unlikely foe, Batman (played by Jim Broadbent). This "Batman" has fallen on hard times. He's even had to trade in his beloved Batmobile, what's he driving these days? The Bat-Cleo.

It's comes as no surprise that Atkinson and Broadbent put in great performances and give a distinctly 'Blackadderish' feel to proceedings. As Batman kidnaps Spider-Plant Man's girlfriend, Jane-Mary, Broadbent's Batman teases:

'She's on a well-known London landmark, you'll just have to figure it out, won't you?'
'Tower Bridge?' Spider-Plant Man suggests casually.
'Damn!'

To cap it all off nicely, Tony Robinson pops up at the end to complete the reunion.

Richard Curtis has since created pastiches of his own movies (both Love Actually and Four Weddings And A Funeral) which have been a fixture of the most recent Red Nose Days. But, for the next classic Comic Relief night parody, French & Saunders took up the baton once again to caricature the movie that may already be a parody of itself (who knows?) Mamma Mia.

What could be more suited to a parody than Mamma Mia? Even the most ardent fan of the franchise would agree that the film was ripe for a send-up. In both 2007 and 2019 French & Saunders took on Mamma Mia and Mamma Mia! Here We Go YET Again.

Both features starred an army of comedians and guest stars. They included Matt Lucas as the clueless choreographer ('point at Demis Roussos'), Joanna Lumley as Christine Baranski playing Tanya - of whom Dawn French (who is playing Julie Walters playing Rosie. Yes, it is confusing!), remarks 'Just do Patsy,' as she and the rest of the cast sit around in mock hysterics, genuinely confused about what they're supposed to be doing. 'It's all you can do,' she scathingly adds.

Dawn probably gets the best line in the parody, as her and Lumley (playing Tanya playing Patsy) struggles to remember the words to Chiquitita.

Mel & Sue were great as the dotty writers (not even the behind-the-scenes crew can escape a take down from French & Saunders), meanwhile Saunders has an uncanny ability to look exactly like whomever she's parodying, in both versions she's a dead ringer for Meryl Streep. Yet the ultimate highlight is her turn as Cher, in perhaps, the wrong trousers?

In this version of the musical the potential fathers of the protagonist, Sophie, are: Philip Glenister, Alan Carr and a swede. 'No, a turnip would be funnier' remarks Alan Carr, and he is right. In the comedy vegetable hierarchy "turnips" are still number one, as Baldrick would attest.

Miranda Hart features in both specials as a dim-witted director. She might just be the best character in the spoof, as she continually struggles to advise the cast on how to transition into a song.

'Sing!' She advises with a blank look on her face.
'There's no music,' replies a confused Carey Mulligan.
'Sing it Acapulco.'

2011 saw Comic Relief depart from the film parody to take on the TV series of the moment, Downton Abbey. The epic continuing drama of a house divided... by stairs.

This all-star cast featured Harry Enfield as the Earl of Grantham, Kim Cattrall as the Countess of Grantham, Jennifer Saunders as the Dowager and Simon Callow as Julian Fellowes. His impression of the MP-turned-writer is uncanny, as he turns to the camera and declares 'Marvellous! I don't know how I do it!'.

The great Victoria Wood also stars, and even future Oscar winner Olivia Colman makes an appearance. It was the sheer amount of talent across the world of comedy and light entertainment, all coming together in one place, that was remarkable about this one. A scene saw Harry Enfield lead Tim Vine and Victoria Wood to meet the staff at Uptown Downstairs Abbey. He introduces them as they walk down a line:

Jennifer Saunders's cracking impression of Maggie Smith's Dowager, and the attention to detail of this parody combined to make it one of Comic Relief's finest. Chiefly, it was the licencing of the real music (also a feature of the Harry Potter sketch) that really made this spoof feel authentic - such benevolence from the production team, bearing in mind that their precious series would essentially be torn to shreds by the Red Nose Day gang, would not be seen outside of Comic Relief, and that's why it's such a special day, not just for charity, but for comedy too.

It was in the second Mamma Mia spoof, during one of French & Saunders's famous staged "backstage" sketches, that Gemma Arterton nervously asks Carey Mulligan:

'This is a tribute isn't it? Because I really love this film and Lily is a really good friend of mine so ...?'
'You're an idiot,' she replies, 'It's a brutal, heartless take-down for Comic Relief.'

It certainly is. And that's why we love it.