Baby Mohammad is having a few unsettled nights, and Shazia and Amjad are finding it difficult to cope with the lack of sleep. Meanwhile, Mr Khan tries to win a Pride of Birmingham award. 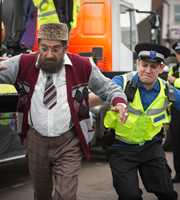 Baby Mohamed is having a few unsettled nights, and Shazia and Amjad are finding it difficult to cope with the lack of sleep.

Mrs Khan thinks they need to spend some quality time together, and deputises Mr Khan to book them a romantic weekend away.

Mr Khan is trying to win a Pride of Birmingham award (Alia misinterprets this as him going on a Birmingham 'Pride' march), which leads to an altercation with a parking attendant at the supermarket.

The dispute escalates and Khan finds himself staging a protest against parking fines from inside his car (after the attendant tries to have it towed away).

The police are called - in the shape of community support officer Amjad - and Khan is able to solve Amjad's problems and his own in one fell swoop.

Alia meanwhile has managed to get herself and baby Mohamed on a TV show, much to the family's embarrassment...