Mr Khan bites off more than he can chew when he takes on a new role as a lollipop man, and a family photo opportunity causes friction between sisters Alia and Shazia.
Preview clip 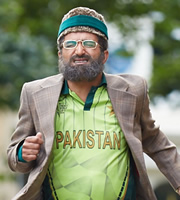 Mr Khan wants to enrol baby Mohammad at a good school and tries to take the inside track by becoming a school crossing patrol officer. But the training regime and selection process is tougher than he was expecting, even with Amjad helping him to get fit on the streets of Birmingham.

Meanwhile Naani wants the family to have a proper family photo done in a studio. Shazia and Alia clash when Alia tries to hijack the studio session to get photos for her personal fashion vlog (which already has thousands of followers - most of them drawn to a video of Mr Khan walking to the bathroom in his underpants).

Anneka Harry was credited in this episode as 'Young Women', but her scenes were cut from the broadcast programme.

Mr Khan shows everyone how to cross the road in Sparkhill.