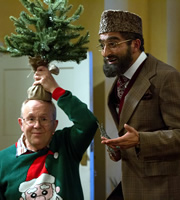 Mr Khan is feeling extremely festive - he's even got a new Christmas suit!

What's more, this year, he's been given the honour of placing the star on top of the Sparkhill inter-faith Christmas Tree. But when the whole family gathers at the Khan house to head out to the ceremony, it turns out that Shazia has other plans, and a frantic chain of events is set in motion, in what can only be described as The Greatest Pakistani Christmas Story Ever Told.