The day of the wedding of Mr Khan's daughter Shazia to 'pakora short of a picnic' Amjad has finally arrived, but all is not well in the Khan household. 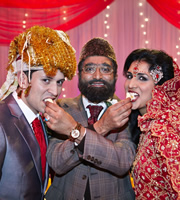 Mrs Khan is still upset that Shazia has opted for a British-Asian fusion affair, rather than a big, fat, traditional Pakistani wedding, then, Shazia won't let her help with the organisation. When Shazia refuses to wear a matriarchal family heirloom, it all gets too much - Mrs Khan refuses to go to the wedding, and instead takes a shift at the supermarket.

So, with Amjad in tow, it's up to Mr Khan to get his wife back on side. But, of course, in Mr Khan's world things aren't that simple. As a result, Amjad goes missing, Shazia's mother-in-law-to-be Mrs Malik makes a startling revelation, and thanks to Mr Khan there's a very near miss at the ceremony.