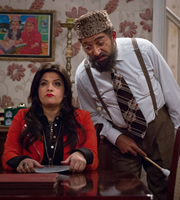 In his new role as househusband, Mr Khan introduces strict new house rules, and sends his younger daughter Alia to a London Mosque for work experience.

Never one to miss out on a bargain, he then abuses Mrs Khan's staff discount card at the supermarket to become the local 'nappy dealer'.

When Alia returns from London with Mrs Khan's domineering sister, Aunty Noor (Nina Wadia), Noor threatens to reveal his scam. But Mr Khan has other ideas and takes drastic action to avoid the wrath of Mrs Khan...