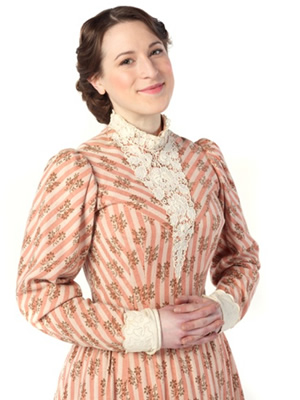 Sketch star Sarah Daykin takes on the role of Winky in Chickens...

What attracted you to Chickens Sarah?

I had seen Jonny performing live with his Edinburgh show, before I'd got into comedy much myself, and I was in awe of what he did. The scripts were so strong from the off, which can be rare, and it was written with the actors in mind. It just flowed and is funny.

And how would you sum up your character, Winky?

Winky is somebody who will take the path of least resistance. She aims to please everyone, which means she sometimes says quite cruel things to her fiancé George, but it's only because of the pressures of the social circle she has to fit into.

Do you feel you have much in common with Winky?

I am definitely someone who finds it difficult to say 'no' to things. It's that British politeness which can really bugger things and leave you kicking yourself a little bit.
What was the atmosphere like on set?

The boys were obviously working incredibly hard and I was lucky enough to dip in and out of it fairly regularly, but it was a hugely supportive set and I learned so much, both from Ben Palmer's direction and the boys. Hopefully, that fun spirit will translate into the show.

You're no stranger to the comedy world, being one half of double act Toby with your sister (pictured below). Can you tell us more about that?

We've done a couple of Edinburgh Festivals and a show at the Soho Theatre, and I've since performed with Jonny.

How did that go?

It was great. We did a tour of England and had a couple of dates where we were both on the same bill - Jonny was the main show and I was the support act. I've watched Jonny five times now, but I could watch him every day. It's funny because all the boys are so different, yet they work so well together. Although I've known Jonny for longer, I ended up loving them all equally. 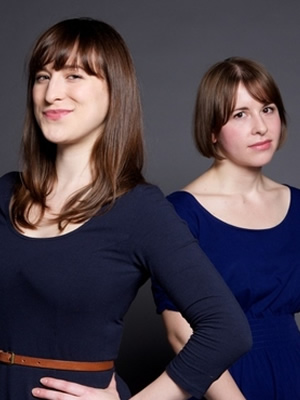 What inspired you to kick-start a career in comedy? Was there one particular moment?

I just realised I had to do something with my life. I went to a character sketch night and had so much fun. It was an escape from life for a little bit, for a couple of hours, and on the bus home with my sister, I thought, yeah, we could do that.

Well, it seems like you made a good decision.

It spiralled very quickly. We've got a unique selling point being sisters, but also we're quite unusual in that our humour is fairly niche and quite dark - dark with a heart.

What's the best reaction you've had from a crowd and what's the worst?

I'm going to start with the worst because they're seared into your brain forever. We did a gig for the BBC in front of about 500 people at the Edinburgh Fringe and there is a moment in our sketch where we really lost the audience. They didn't like us at that point [laughs]. And the best... We did the Free Fringe in the first year, got loads of money in the bucket and spent it every day on alcohol. You had to earn your money, there wasn't a set amount, so they gave what they believed in the show. It's a real meritocracy in a way.

And what's the best piece of career advice you've been given?

Comedians tend to be respectful of each other's work because comedy is so subjective - something that makes one person laugh can upset another. Acting-wise, the best advice I've been given is, say it like it's the first time you've been saying it, and, say it like you mean it.

Last but not least, when was the last time you chickened out of something?

I live my life through fear and, although it does drive me to do things, it also probably prevents me from doing things as well.