Charlie Brooker, with the help of Dom Joly, Graham Linehan and Dara O'Brian, looks at video games and their relationship with the media.
Preview clip 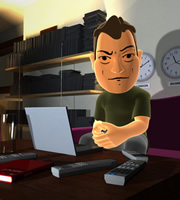 Following in the footsteps of Screenwipe and Newswipe, Charlie Brooker's Gameswipe pokes fun at the world of video games and its relationship with the media.

Video games continue to be looked down upon by other media and Gameswipe aims to bring some equality into the mix by illustrating how games can be just as dumb or brilliant as TV and movies.

Charlie Brooker comments: "It's good to be doing more Wipes for BBC4. I started my writing career penning video game reviews, so Gameswipe effectively sees me coming full-circle: it's evolution in reverse basically. Expect pixels, joypads, some of the world's weirdest games, celebrity cameos and the occasional sound effect."

Comedian Dom Joly ventures into the online gaming world and does his best to wind up hardcore gamers as they relax with their favourite games. Other contributors include Graham Linehan and Dara O'Brian.

Charlie Brooker gives his verdict of The Beatles: Rock Band.