Keith, Fearne, Holly and Rufus are joined by Westlife band members Kian Egan and Mark Feehily, plus award-winning comedian Russell Kane for a festive special of the panel show. 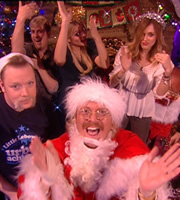 The teams will take part in some seasonal fun and games as they try to prove who knows the most about the latest celebrity gossip. Plus Jedward take part in a special round and there will be an appearance by a surprise mystery guest at the end of the show.