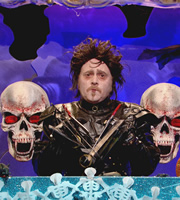 The teams and their costumes are:

Holly gets a fright

Keith gets Holly to head over to a photo-booth... where she gets quite a fright!