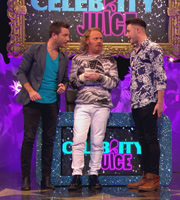 Gino D'Acampo is credited as Gino Sheffield D'Acampo from this episode onwards, having added the new middle name during this programme.