Jackie and Elaine go on a spying mission and are shocked when they discover Tony's little secret.
Preview clips 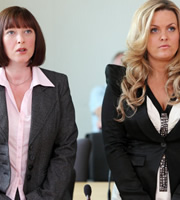 Jackie and Elaine go on a spying mission and are shocked when they discover Tony's little secret.

There's no time to dwell on what they've found, however, as they head to an employment tribunal where they face a charge of discrimination against men. Though they have no proof, they suspect that rival cabbie operator, Kenny Ho, is behind the accusations - which could spell the end for the all-girl Candy Cabs.

Still desperately trying to drum up business, they think they've hit upon a winner when they get a trial run with Girls On The Go, an all-female Seniors' Club. However, in true Candy fashion, nothing goes to plan when an outing to a garden centre with the feisty old ladies lands them in some very deep water.

Meanwhile, Elaine begs Jackie to keep Tony onside until the dreaded discrimination tribunal but, still in bits over what she's discovered, Jackie can't stop herself confronting him. To add to their worries, Witney tells them she's about to go to Spain with her dad, leaving them to question whether Dennis has finally decided to become a decent father - or whether he has more dastardly plans up his sleeve.

On the day of the tribunal, Jackie decides that desperate times call for desperate measures - much to Elaine's horror. Kenny also has a few surprises of his own.

Jackie turns into an arsonist on her own front lawn, much to Barry's horror.

Kenny is enjoying his Earl Grey tea in a sea front cafe when Tony storms in with some serious accusations of wrong doing.

Jackie accuses Elaine of turning into a boring housewife, and reminds her how feisty she was when they were in school.