As Jackie and Elaine deal with the fallout from their television appearance, Eddie Shannon, a local football star, could bring some much needed publicity for Candy Cabs.
Preview clips 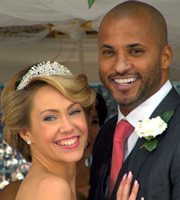 Business is picking up following Jackie and Elaine's television appearance and they're thrilled when footballer Eddie Shannon books Candy Cabs to provide the transport for his high-profile wedding at the local stadium.

The dastardly Dennis slyly tries to wangle his way back into Witney's good books when she's left out of the wedding excitement.

Meanwhile, over at Kenny Ho's rival cab firm, the male drivers are up in arms, threatened by the female competition. The plotting against Jackie and Elaine gathers pace when the troublemakers start causing mischief among South Hadley's movers and shakers. Things come to a head when Kenny turns up at Elaine's house with an extraordinary offer.

Later, wedding madness ensues when bride-to-be Kendra goes missing following the hen night. Candy Cabs find themselves at the centre of a wedding attended by 10,000 football supporters which looks set to become a PR disaster.

Elsewhere, Dave's sister Diane is on the warpath after being sacked as a driver, while Alex's infatuation with his sister-in-law, Elaine, crosses the line.

Despite all the mayhem, Jackie's romance with Tony is blossoming - until Sally Ann makes a disturbing discovery. There also seems to be a story behind the unexpected package that lands on Tony's doorstep.

It's Kendra's hen night, and the Candy girls are on the way out of the night club fully decked in their fancy dress when they encounter Kenny Ho's drivers spoiling for a fight. But not to be bullied, they give as good they get.

Dennis tries to make amends with Jackie and Elaine and shmoozes them with cups of tea in the Candy Cabs office. But Dennis's description of himself as a consultant doesn't wash... and Jackie sends him out to valet the cabs... or, as she puts it, consult with the hosepipe.

When Jackie and Tony go on their first date, they reckon if they can't stand the same things, they're on to a winner.