With six pink cars making their way to the seaside resort of Hadley, will Jackie and Elaine be able to make their dream of setting up a taxi company run by women a reality?
Preview clips 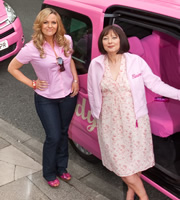 Best friends Jackie and Elaine are mourning the death of their friend Shazza, whose passing has left them in the lurch just as they were set to go into business with an all-female cab company. It's at Shazza's funeral that they make a pact to proceed with their plan.

With chaotic personal lives, a secretly re-mortgaged home and a bunch of best friends depending on them for jobs, they embark on their dream of Candy Cabs. Taking the biggest gamble of their lives, they accept delivery of a fleet of bright pink taxis, celebrate with a launch party and pray that business will flow.

But they soon discover a host of hidden obstacles, including the need to sit the "knowledge" before they can even hit the road, and the little problem of signing up customers. Jackie takes an unorthodox approach to manipulating the media, much to Elaine's dismay. And just what are the motives of Kenny Ho, the enigmatic boss of the town's largest fleet of cabs?

The shady Dennis, Shazza's ex, turns up to disrupt their lives, Elaine struggles to keep her secret from her husband and, unexpectedly, romance is in the air for Jackie.

With so many distractions, can they keep their eyes on the road and turn their fledgling business into the success they dream about?

Elaine has a confession to make. She still hasn't told her husband Dave that she's remortgaged the house to start Candy Cabs. A somewhat unsympathetic Jackie isn't helping with her smart remarks but comes to the rescue with the 'magic marigold' when Elaine has a full blown panic attack.

Dennis Sunbathes In His Leopard Skin

The girls arrive in the brand new fleet of Candy Cabs only to be confronted with Dennis sunbathing with Witney on the lawn in his leopard-skin tanga briefs. Will Witney be tempted to leave her errant Dad and go along for the ride?

The girls strip off for diet tyrant Stella as she weighs them at her Fat Club whilst trying to flog her Swedish flab killer 'Slime Shakes'.