Leo Macdonald isn't having too good a day. He's been sacked, his mum's in despair, and his younger, even less employable brother's having a better evening meeting women. Things look up, however, when he meets an attractive woman at the bar.
Preview clip 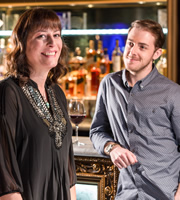 Leo Macdonald is having a bad day. He's lost his job (this isn't the first time he's been sacked) and then ends up playing gooseberry on a night out with his brother James. Things start to look up though when he falls into conversation with his neighbour at the bar.

Leo is immediately attracted to this beguiling older woman, Judy, and asks her out on a date. Leo's mother, Pam, is furious when she learns that her boy is going out to dinner with a "much older" woman. But Leo doesn't care; he knows that he's just met someone very special.

Leo's mum, Pam, has some reservations about his new girlfriend...