The horror of having had sex with Jay is close to tipping Danny over the edge. Confronted by Pete he finally blurts out the truth - he's Danny and he's stuck inside this woman's body. 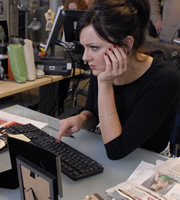 The horror of having had sex with Jay is close to tipping Danny over the edge. Confronted by Pete he finally blurts out the truth - he's Danny and he's stuck inside this woman's body. Pete's horrified, freaked out and disbelieving. When Danny arrives at work and Bill reads the Riot Act to him, he finally flips. Standing up in front of the entire office he announces that he's not Veronica Burton, he's a man, and his name is Danny Reed. He is almost immediately carted off to a mental health unit.

Siobhan and Jay rally round, and Jay even calls Veronica's parents to come and visit! Who of course Danny's never met. However, the weirdest fact is that Siobhan and Jay have never met them either and it's quite clear that Veronica lied about them being vicious middle-class bullies when they're just sweet down-to-earth folk. It's almost as though Veronica re-invented herself in a new city and tried to wipe away her past. Inside her body, Danny begins to empathise with her. A worried Fiona tries to visit but Jay and Siobhan turn her away.

Later, Danny is stunned when he spots 'D. Reed' above one of the beds in the hospital. Veronica (in his body) must have been telling people he's a woman and has been locked up, but has now escaped. Feeling utterly deflated, he's given a very difficult choice; does he continue to insist he's a man and stay locked up indefinitely, or convince them that he is in fact Veronica and he's completely sane and be freed. Convinced he'll never find his body, Danny makes a choice - to be Veronica and this time to do it properly, until he believes it himself. Jay takes him home and Danny is holding it together until Jay proposes marriage. Danny's struggling to respond when the doorbell rings - it's Fiona. In a private moment, it soon becomes clear that Fiona does have feelings for him - but only as Veronica. As he's in Fiona's arms he experiences for the first time what it's like to be with the person you love. And suddenly, being Veronica makes sense. As Danny there'd be no chance of being with Fiona, but as Veronica, it's suddenly, thrillingly, possible...