Baxter returns as a holiday tutor for Clarence's grandson, George. To Clarence's horror, Baxter plans to weasel his way back into permanent employment at Blandings.
Preview clip 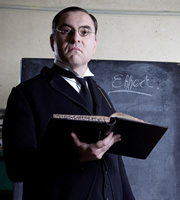 Blandings is threatened by the return of dictatorial secretary Baxter, hired by Connie to put an end to all tomfoolery.

This is a tragedy for Clarence; but he finds an unusual ally in his grandson, George, who has been happily rampaging through the grounds with an air rifle. It is not long before there is an outbreak of clandestine shooting and smarting buttocks.

Meanwhile, Freddie returns to coax Clarence into to clearing his debts. This time he is pursued by East End gangsters and brings with him a beguiling dancer who takes a fancy to Beach.

Aim for the Rear!

Young George spots his air rifle and picks off Baxter, who is climbing up a drain pipe.