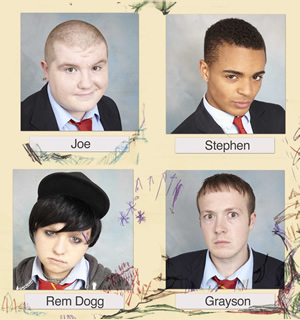 Ethan Lawrence (Joe), Layton Williams (Stephen), Jack Binstead (Rem Dogg) and Jack Bence (Grayson) sat down with BCG and some other publications on the set of Series 3 of Bad Education to answer the following questions...

How does it feel to be embarking on your last series?

Layton: It's quite sad. Bitter-sweet. It's been amazing though, we're going to miss each other I'm sure.

Jack Binstead: We've always known this was going to happen eventually, so we knew this was the one where we could really enjoy it.

Jack Bence: I think that's the cool thing with British comedy though; we don't kinda drag it out for 10, 15 series. We always anticipated that, well, we'd be surprised if it went on much longer...

Layton: There's only so long you can get away with playing 15.

Have you found, as the three series have gone on, Jack Whitehall and Freddy Syborn have written more of your own personalities into the characters?

Layton: Yeah. Jack likes to pick up on the lingo, the chat when I'm just being me. It's half amazing and half annoying because I want people to distinguish between the character and me. It's a bit close now! Stephen's basically saying what I would say, which is kinda cool because it's real, but yeah, it's good because we put our stamp on it.

Ethan: Jack and Freddy know our limits now. They know how far we can be pushed, not only as characters but as actors, what we can do throughout.

Jack Binstead: There's a real curveball thrown in to my character this series as well, a whole change. A real growing into your character, and he's been altered quite drastically.

Layton: When I get the script, I go through and think "Mmm ..." and "Well there's a cuter way of saying that", so I do kind of do it to myself! 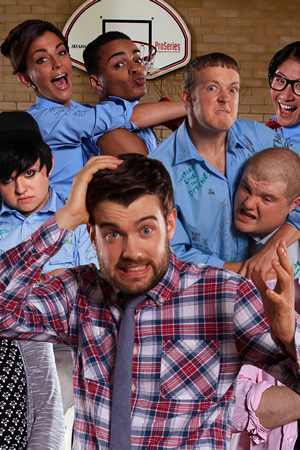 What's the best humiliation for Joe this series?

Ethan: Ooof. Where to start?! Tell you what, we'll go to one today. I've had a tumescent penis drawn on my face by Master Jack Bence over there - and that's not even the worst one! Without wishing to spoil anything, if you thought the stuff that happened to Joe in Series 1 and Series 2 was bad, prepare for a whole new can of worms!

Do you look through each new script to see what they have in store for you?

Ethan: Yeah, it's great. I look through it and I'm like "Oh, good job I do all my own stunts!"

The girls have said that there's something about putting on a school uniform that makes you regress...

Ethan: It has always been thus! Every new series we get a new school book and they're quickly decorated with cocks.

Layton: So many penises, so much practice - I'm really good at it now! Sounds so wrong...

Ethan: There's doing it for the art, but it has actually become an art-form!

Layton: Our books are good, we should sell them.

Jack Bence: I've actually done more work here than I ever did in school, so I've learnt a lot as well.

And how are Jack's rap skills? He's been channelling Coolio...

Layton: Awful. But so funny.

Jack Bence: I thought he had lyrics, I'm not gonna lie.

Jack Binstead: I wouldn't sign him up! His gangster acting is questionable.

Jack Bence: He's got a good gangster lean though, he has mastered that. 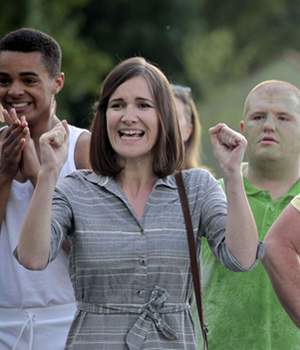 Do you have a favourite episode from this series?

Ethan: Episode 3. Sports Day. Obviously it's not a normal sports day though, it's a Bad Education sports day!

Layton: I get to showcase something really cute which I've always wanted to showcase, so... look out for that!

Ethan: It's interesting because we've had one sports-related episode in each previous series so it's nice the culmination of that as a classic sports day that ends up being ... not as 'classic' as some of the sports days that I've previously attended!

Layton: It's a fierce episode. AND Episode 6 actually. It's really emotional, we were doing one scene saying goodbye and I got all teary. It was kinda real.

Jack Binstead: The culmination of 3 years together, so...

So will you stay in touch then?

Layton: Everyone's so busy doing their own thing ... we do try, but it's not easy. And Charlie Wernham [Mitchell] is back in Liverpool filming Hollyoaks. We've got our own WhatsApp group though! So now we can just annoy each other all the time.

What are you going to miss most about the show once you've left?

Layton: These guys. We've got to know each other so well. For some of us it's been 3 years, for some 5. I've known Nikki [Nikki Runeckles who plays Chantelle] now for five years because we started reading lines two years before the first series.

Jack Binstead: I was thirteen years old when I auditioned for the part and we didn't start filming till I was 15. Now I've turned 18, so it's taken up my entire teenage years, doing stuff for the show, so... it's incredibly, yeah, I'll miss it a lot.

Jack Bence: I think the camaraderie. And, we use this word all the time because it's in the script, but 'banter'. Just the constant jokes. It's such a laugh.

Jack Binstead: We have such a good relationship with the crew as well. There's always banter with the camera men. 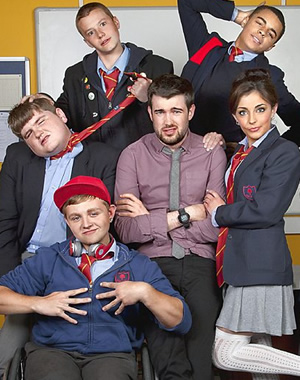 How does Abbey Grove compare to your own school days?

Jack Bence: It's probably a bit more well-behaved than my school was!

Ethan: I didn't get covered in as much shit, that's for sure.

Jack Binstead: I definitely got as many wheelchair jokes thrown at me. That's not changed at all. It's always around the corner. I love it, honestly, I absolutely love it. I think it's always been a coping mechanism. That's why there are so many in the show. It was a big thing in Series 2 that I was referred to as Gran Turismo. And then again there's something in Sports Day this series that takes the piss quite a bit! I love it, it's how I express myself as well. It always lightens the mood.

Jack Bence: It's pretty different in a lot of ways, but the same in terms of the kind of relationships that you build up.

Do people confuse you for your characters when you're out and about?

Jack Bence: Yeah, most people hide things they don't want me to steal... Ha ha. I had a really weird one when I was out having a drink. You assume most of our demographic are like teenagers and people still in school, but a group of businessmen came up to me and one of them asked me to punch their mate, which I thought was a bit odd! I'm like "No, I'm just out with my pals!" No, but the few times I do get recognised I'm quite smiley and that, so I think people recognise quite quickly that I'm not the bully.

Layton: I get "Gay boy Bad Education!" shouted a lot.

Jack Bence: Ha yeah, since the Christmas special I get that as well!