Bride-to-be Zoe must convince her hens that new, dippy hippy bridesmaid 'Daisy' is her fiance's relative and not an imposter.
Preview clip 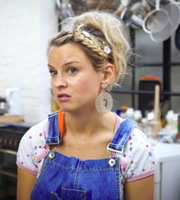 Bride-to-be Zoe is about to embark on a fun hen weekend with maid of honour Emma, bridesmaids Sophie and Lisa and close friends Vicky, Sarah and Jo. Over four days Zoe will need to convince her mates that eccentrically hippy Daisy is her fiancée's mum's cousin who has joined celebrations at the last minute.

But Daisy, played by Anna Morris, is a completely unique creation, specially written and tailor made for our bride-to-be and her hens, will know exactly what buttons to press to ensure sparks fly and hilarity ensues on a weekend they're never likely to forget.

Bride Zoe has her work cut out as Daisy sets to work causing mischief amongst the other maids. The close friends are all clear on what they hope to get from their weekend away and Daisy's typical hen do paraphernalia is definitely not what they had in mind. However, Zoe will have to go along with Daisy's suggestions if she is to be in with a chance to win the dream honeymoon.

But the shenanigans don't stop there, from commandeering the photoshoot, to flirting with special guest and TOWIE star Arg who is there to serenade the bride to be, Daisy is pushing the maids to the very limits - but how will the girls fare when Daisy suggests that she is joint Maid of Honour with Emma?

Can Zoe hold their nerve and go along with everything her Bad Bridesmaid throws at her to secure their dream honeymoon as their hen weekend descends into chaos?

Anna Morris is back for the final episode of Bad Bridesmaid, and this time she's playing Daisy... a party guest who is definitely planning on shaking things up.