Bride-to-be Nicola must convince her hens that 'Jemma' is her fiancé's relative and not an imposter.
Preview clip 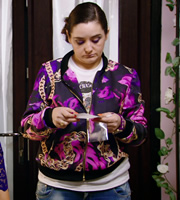 Bride-to-be Nicola is about to embark on a fun hen weekend with best mate Nikki, close friend Claire, and cousins Emily and Charlene. Over four days Nicola will need to convince her mates that brash Newcastle lass Jemma is her fiancé's second cousin who has joined the celebrations at the last minute.

But Jemma, played by comedian Holly Burn, is a completely unique creation, specially written and tailor-made for our bride-to-be and her hens.

The outspoken trainee beautician from Whitley Bay gets straight to work ruffling feathers amongst her fellow maids by playing a disastrous game of 'guess the ages', but it's her bizarre antics at dinner, which see her locked in a toilet, that really tests their patience... With three days left, can Nicola hold her nerve and go along with everything that is thrown at her?

Jemma however is not finished and sets about causing havoc during the cheerleading activity before unleashing her uniquely creative make up talents on the maids - shockwaves really hit the bridal party when Jemma takes a pair of scissors to her bridesmaid dress.

Jemma is a nightmare bridesmaid.