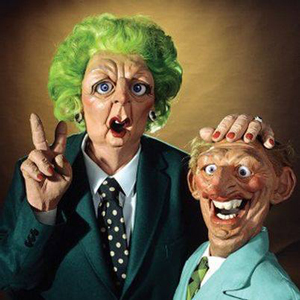 On the 27th February 2014, BFI Southbank (in London) will celebrate the 30th anniversary of Spitting Image, which it labels 'one of the most innovative and daring television programmes ever conceived'.

The BFI is bringing together Spitting Image impressionists, writers and some of the politicians the show lampooned in a very special one off event titled Spitting Image: A 30th Anniversary Celebration.

From 1984 to 1996, Spitting Image used latex puppets to mercilessly caricature the great and good. From Margaret Thatcher, Ronald Regan and The Queen to Mick Jagger, Alan Bennett and Arnold Schwarzenegger - no one was safe.

Spitting Image: A 30th Anniversary Celebration will offer a chance to hear from a panel of well known writers and performers who gave the show its satirical edge, daring to produce outrageously risky material that ridiculed the establishment, to increasing public popularity. These panellists will include Harry Enfield, Ian Hislop, Kate Robbins, Rob Grant, Richard Holloway and the voice of Margaret Thatcher, Steve Nallon.

The creators of the show - Peter Fluck and Roger Law - and producer John Lloyd will also take part, as will Lord Roy Hattersley and Lord David Steel, two of the politicians skewered by the show. They will discuss the effect their puppet personas had on their careers.

The event will also use clips to examine the show's controversial impact at the time and its lasting legacy, and reveal behind-the-scenes secrets of the performers, puppeteers, writers and directors.

Arena: Whatever Happened To Spitting Image?, the new BBC Four documentary, will also be screened as part of the event, and will be followed by a Q&A with director Anthony Wall, alongside Fluck, Law and Lloyd.

Below is the official listings for the events...

Thirty years ago Roger Law and Peter Fluck were happily ensconced in a converted Temperance Hall in Cambridge making cruelly funny plasticine caricatures. These models were photographed and presented to the world in print under the anonymous byline 'Luck & Flaw.' Unlike a drawing, the caricatures looked like they might move and, Geppetto-style, they did. Law and Fluck, with co-conspirator, TV comedy supremo John Lloyd, unleashed one of the most shocking and hilarious TV series ever. Now, BBC Four's flagship arts documentary series tells the story of Spitting Image.

The screening is followed by a Q&A with Peter Fluck, Roger Law, John Lloyd and Anthony Wall.

BFI is delighted to host a panel of well-known writers and performers who gave the show its satirical edge and who became household names in the process, alongside some of their victims - politicians and celebrities - who will discuss the effect their puppet personas had on their careers. Using illustrative clips, we examine the show's controversial impact at the time and its lasting legacy, and reveal behind-the-scenes secrets of the performers, puppeteers, writers and directors. So, in the words of one famous crew member: 'puppets up, loves - wave those dollies in the air!'