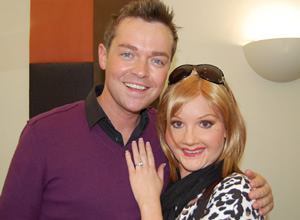 Celebrities take time out from fame to play tricks on their fans and famous friends by donning cunning disguises in this ITV1 pilot.

First up, Jennie is disguised as an Essex WAG and tries to fool her Coronation Street cast mate Michelle Keegan (who plays Tina McIntyre in the soap), her dad and unwitting passers-by in a Manchester shopping centre.

The make-up team behind hit film trilogy The Lord of the Rings give her a completely new look - which includes a new prosthetic face, sleek blonde hair, spray tan, false nails and plumped up lips. Jennie takes on the mannerisms and accent of her new Essex alter ego 'Mel'.

Stephen is then hidden away from view watching the action unfold on a monitor. He creates mischief by directing Jennie, who wears an earpiece so she can follow his instructions, as she approaches passers-by. 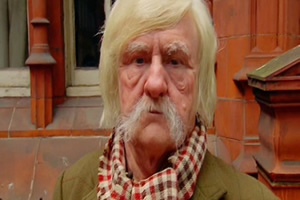 Among those she attempts to trick are her Corrie best friend Michelle Keegan, an unsuspecting security guard, her dad, Tom, and his girlfriend, Linda. But do they see past the disguise or are the jokes on them?

Louis Walsh's transformation from music industry maestro into a grandpa from hell takes four hours and he quips: "Four hours - Simon only spends two in make-up!" When Stephen shows him the results in the mirror a shocked Louis says: "Oh God I look awful... I don't like him." He's been aged by 20 years, been given bushy eyebrows, a moustache, droopy jowls and a flock of white hair.

But while the physical transformation is a success, Louis tries out Australian and American accents before deciding: "I'm Irish, I may as well stay Irish." The JLS boys Aston and Marvin, and pop star Shayne Ward, who Louis manages, are his unwitting victims. But when it comes to fooling the music acts has Louis got the X Factor? 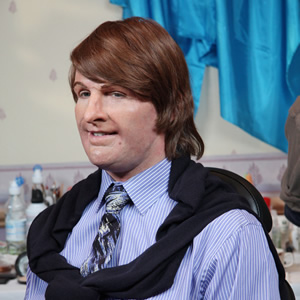 The final celebrity to don a state-of-the-art prosthetic disguise is rugby player Matt Dawson who, after four hours in the chair, becomes a well-to-do theatre director called Ian to try to fool his friend and team mate Austin Healey.

Austin has been invited to a West End theatre to give advice on the technicalities of rugby to the cast of a pretend new musical - Scrum. How long can he keep the pretence up without Austin realising the true identity of the camp impresario? And will a performance of the most ridiculous musical ever arouse suspicion?

Mischievously stage-managed by Stephen from behind the scenes, Anonymous tests the abilities and, at times, patience of the celebrities taking part.