Jonathan Ross chats about The British Comedy Awards; Kevin Bridges and Jack Whitehall tell Alan about the second series of Stand Up for the Week; and singer/songwriter Adele reveals her plans for the year. 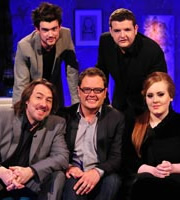 Alan is joined on the sofa by Jonathan Ross who talks about hosting The British Comedy Awards - coming soon to Channel 4. Two bright lights on the UK comedy circuit: Kevin Bridges and Jack Whitehall drop in to talk about their new series of Stand Up for the Week. And singer/songwriter Adele reveals her plans for the year and performs Rolling in Deep from her new album.