Alan is joined by actor Hugh Grant, who talks about his latest film The Rewrite, while Davina McCall and Dr Christian Jessen chat about the Stand Up To Cancer fundraising event on Channel 4 on October 17, and Noel Fielding talks about his latest stand-up tour. Plus, there's music from Ariana Grande who performs her latest single Break Free.
Preview clip 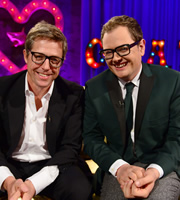 Noel Fielding, asked by Alan about touring with Kasabian said: "That was so un-rock 'n' roll, it was hilarious. On the way to the gig in the tour bus me and Serge - this is true, and I'm ashamed to say this - we listened to an audio book on the way there. It get's worse - Three Men in a Boat, read by Hugh Laurie, we drank peppermint tea and we were under a duvet like that [puts on elderly voice] 'this is amazing'. That's how we entered Glastonbury.

Noel Fielding has been under the weather recently, so Alan created a new drink for him to make him feel better, consisting of a Sambuca and Berocca.