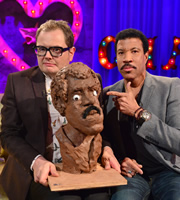 Plus there's music from Ella Eyre who performs Comeback live in the studio.

This is a bit disturbing.