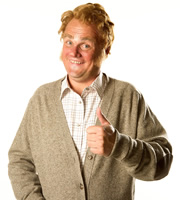 Premiership footballer Jason Bent talks to a reporter about his contract.

Did someone say Kamp?

Horst Schwull is Hitler's most trusted aide. He is just a little on the 'kamp' side...

A phone shop that really needs to work on its customer service.