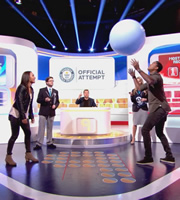 Under the watchful eye of official adjudicators, Corden and the gang have a go at breaking some Guinness World records - including Watson's tally for most Swiss ball headers - followed by a spot of Human Foosball.

Someone should have told a nauseous Whitehall that it's not a game for the faint-hearted (especially when you're being 'controlled' by Flintoff).

It's all hands on deck, meanwhile, in a punishing final challenge. Deep Heat on standby, the Reds and Blues are left hanging upside-down high above the studio floor as they do their best to cling on to a set of Chinese poles while answering quick-fire questions. Who will be the first to drop?

Patrick Kluivert and Heather Watson are after a prestigious world record - greatest number of consecutive head bounces with a swiss ball.

How to make sports trivia more difficult: make everyone hang upside down from a pole.