Host James Corden, and team captains Jamie Redknapp and Freddie Flintoff, are joined by Chris Evans and Tim Henman for this week's fixture. 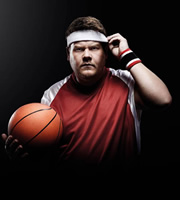 James Corden presides over the Red and Blue teams for another trivia-packed evening featuring F1, tennis, golf and... rock climbing!

This week, Jamie Redknapp and John Bishop are joined by British tennis legend Tim Henman on the Red team, while TV and radio star and avid golfer Chris Evans joins Freddie Flintoff and Georgie Thompson on the Blue team.

Tonight, Henman reveals that he's not a fan of women's tennis and competes against Evans in a rock climbing challenge in the studio. And during this week's contest, the teams must tackle a range of sporting questions including: What's the loudest? A F1 racing car, a vuvuzela or a female tennis player?; Who was the highest earner last year: Tiger Woods, Roger Federer or Thierry Henry?; And what are the best things about being a football manager, according to Harry Redknapp (who gets a surprise call from son Jamie during the show)?