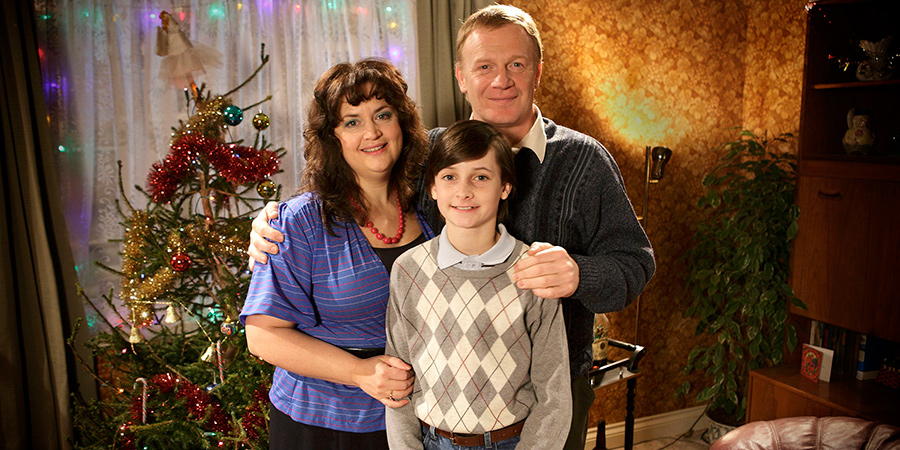 A Child's Christmases In Wales

A one-off period comedy, peeping into the lives of a south Wales family's Christmases across the 1980s. Written by Mark Watson

Child's Christmas in Wales evoked by Dylan Thomas, and the inspiration for this captivating story, is a montage of many idyllic, colourful festive seasons rolled into one delicious dream. But for young Owen Rhys, growing up in a terraced house in Eighties South Wales, Christmas is a rather less poetic affair - though just as eventful.

Every Christmas, the peace and quiet of Owen's house - where he lives with his pessimistic father and his obsessively tidy mother - is shattered by the arrival of three family members: Owen's two uncles and his cousin, Maurice. In a series of glimpses from three Christmases across the decade, Owen and Maurice grow from boys into young men, while his dad and uncles seem to regress to a childhood of sibling rivalry and Owen's mum watches in despair.

The years change but the Christmas routine remains the same. Dad and his older brother, Hugh, bicker and undermine each other; Hugh's son, Maurice, and Owen are forced into competitive games which play out their respective fathers' rivalries; the youngest brother, Gorwel, the black sheep of the family, arrives late, hands out badly judged presents and usually destroys the bathroom; while Owen's mother, Brenda, tries to prevent everything from going to pieces.

Yet despite all this antagonism there is a peculiar joy in the certainty that they couldn't really have Christmas without the family.