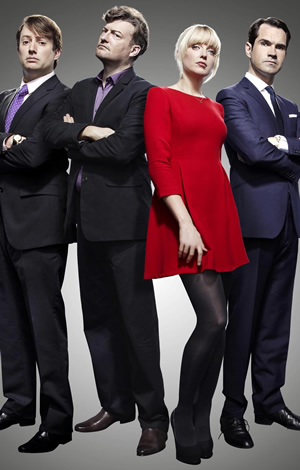 10 O'Clock Live with David Mitchell, Charlie Brooker, Lauren Laverne and Jimmy Carr is back for a third series. Here David, Lauren and Jimmy talk more about the show...

What's been your favourite moment on the show so far?

David: My favourite moment was the debate about gay marriage between Milo Yiannopoulos, quite a young, but very conservative, Catholic gay man, and Boy George. We set it up in the hope of a heated argument about gay rights and the traditions of society and the church but instead got something much better: a more measured discussion about coming to terms with being gay, and society coming to terms with the fact that some people are gay, in which both contributors came across as nice people, and Boy George was remarkably kindly and wise. It didn't feel like the sort of debate that you see very often on TV.

Jimmy: I like it when we're just sitting around talking and suddenly David Mitchell drops a 'logic bomb'.

Lauren: It's hard to choose, but probably Charlie's amazing piece about phone hacking and The News of the World, which started out as a piece to camera but ended up almost a poem. He was so worried he was going to fluff it and he just ACED it. That will be pretty hard to top.

Has being on 10 O'Clock Live changed the way you watch the news? Do you just watch it now looking for things to satirise?

Lauren: I'm a lot more cynical. A combination of working on 10 O'Clock Live and an addiction to The West Wing has either ruined or revolutionised current affairs for me. I'm still deciding which...

David: To be honest, that happened to me a long time before I started doing 10 O'Clock Live! Several years of appearing on panel shows and writing a column for The Observer has reduced me to seeing current affairs as no more than the loam from which comic material can grow. It mustn't be too serious or no one wants you to look for a funny side, or too trivial or it doesn't matter at all and there's nothing to satirise, but something juicy in between that doesn't involve too much killing. Somewhere between Syria and Jordan (aka Katie Price). Leveson and Huhne are right on the money.

Jimmy: I now watch all news broadcasts with Charlie Brooker's voice in my head.

Who would you really love to see appear as a guest on the show?

David: Peter Cook - but he's dead. Still, he's probably just as likely to come on as Tony Blair, who would also be interesting. I'd like to ask him what the hell he thinks is the point of anything he does now. And what's the secret of his tan.

Lauren: David Cameron. He's top dog, so he's the one to aim for. I think his background in PR helps him on TV - but would his skills stretch to our show? It's a completely different environment from the usual stage-managed photo ops or formal settings we see him in. Watching how he handled it would be fascinating.

The show is broadcast live - is that terrifying? What's been your most embarrassing moment on the show?

David: Oddly, I don't find the live element that frightening. Once you're doing something in front of a studio audience it already feels so public that the distinction between it being recorded or being transmitted live doesn't matter much. Three hundred people is already too many to make a dick of yourself in front of! I can't think of a specific embarrassing moment - the day when I accidentally do a whole show with my cock hanging out is still ahead of me. But I think the worst thing about the live environment is that if you stumble on a joke you don't get another chance to tell it. And, for some reason, an audience will never laugh at a joke if you've stumbled on your words - however slightly and however clear the sense still is - something about it makes people too uncomfortable to show amusement.

Jimmy: Dangling from the lighting rig of the studio dressed as an SAS Soldier hopelessly spinning away from the autocue I was trying to read.

Lauren: Most of the TV and all of the radio work I do is live so I'm very used to that these days. Having said that, there is a lot going on in every show we do, and making it hang together can be tricky, especially as items are expanding or being dropped as we go. There haven't been any major incidents so far, but each week is a fresh opportunity for absolutely everything that is remotely 'mess-uppable' to go extremely wrong in front of the entire nation. Taking that risk, then attempting to stop that happening is the joy of live broadcasting.

10 O'Clock Live is on Channel 4 on Wednesdays.