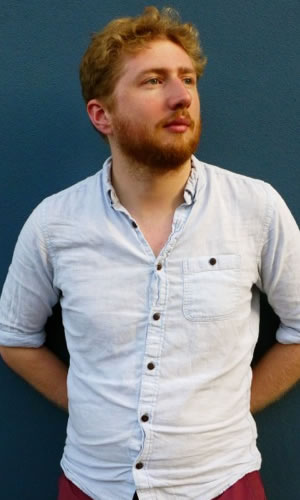 With the fantastic news that The Sitcom Mission 2015's winning entry, Blue Sky Thinking, has been optioned by Hat Trick Productions, we spoke to winning author James Huntrods about how he came to enter our competition and how things have progressed since winning.

What's your background and when did you decide you wanted to be a writer?

It started with me writing books about our family cats and forcing my parents to read them. Thanks Mum and Dad for putting up with that.

Later on I found scripts became my favourite way of telling stories. At school we ended up doing a play written by a student who had just left and it clicked: I can do that too. So I wrote a play for all my friends and put it on. It probably wasn't great (in my rose-tinted memory it was brilliant) but after that I had the bug.

Theatre was my way in to all scriptwriting. I wrote loads of plays at university and wrote four scripts for the Edinburgh Fringe. I still love writing for theatre. I regularly write for shorts nights and I'm still seeking that elusive London debut. Theatre has given me confidence and caution in equal measure, because there's nothing like the sound of a shuffling, yawning audience to make you raise your game.

Who are your influences?

I have a lot of theatre influences, but I'll just stick to TV. First love for comedy writers came through marveling at Sam Bain and Jesse Armstrong's shows. But also I love the scripts and series of Arthur Matthews, Graham Linehan, Adam Buxton, Freddy Syborn, Tina Fey, Greg Daniels. God, it just goes on forever. Anyone who can make a show that surprises you whilst simultaneously using characters that keep making the same mistakes.

What was your biggest mistake or failure and how has it helped you in the long run?

At university I wrote a pretty awful play. But I didn't realise it was awful until I watched the audience struggle through it. And then in the bar afterwards all my friends changed the topic when I asked what they thought. That was a pretty sobering experience. But ultimately it made me want to raise my game. I don't want that experience again.

I still have a letter of complaint I got for that play on my wall. Somebody actually wrote in (anonymously, sadly) to the student paper to say how much they hated it. It sits proudly on my wall next to positive reviews from Edinburgh. Any time I'm feeling smug I'll give it a read.

Which show do you wish you could have written and why?

Parks And Recreation is just a beautiful ensemble sitcom that gets the heart and funny exactly right. It was a touchstone for Blue Sky Thinking because I wanted to get a workplace environment that was richly furnished with competing characters. Even when those characters are being arseholes you love them.

Recently on British TV I've thoroughly enjoyed Top Coppers. It is just absolutely mad and, once again, has some fantastic characters. It is very self-aware not only in its parody of the detective genre but also of TV tropes. Its masterstroke is how it begins with a cliché (i.e. villain backing out of room, gun pointed at hostage) and then spins it on its head (doors close mid-way through him backing away, so he has to come back in and finish his sentence). It's the opposite of lazy writing - it's writing that asks "how can we twist this to surprise our audience?"

Toast Of London also continues to peddle its crazy world and I love it for it. I love how it doesn't have a flat or an office or a "gang" who have A/B plots every episode, but it's the tone and the character of Toast that holds it all together.

You enter a lot of writing competitions. Why?

Validation! No - the real reason is "why not?" I don't write specifically for the competitions, but when I have a new spec it just feels sensible to send it out to multiple places. There tends to be a bunch of deadlines in the summer, so as long as I finish a decent draft by April or May I can spread it out to a few places.

I started entering competitions because I couldn't see any other way to knock on the door of the industry. In comedy there's a trend for performers to get TV meetings from having a successful Edinburgh show. But as a writer who doesn't perform I just don't know how else to get anyone's attention. I was a runner at Big Talk for a while and a producer there very kindly would read my scripts a bit and offer feedback. But the wider industry felt very out of reach. Writing competitions has been the only way in for me, despite the crazy odds.

Do you choose writing competitions that take you out of your comfort zone or stick to ones that fit in with your writing style?

In many ways The Sitcom Mission took me out of my comfort zone. It is 15 minutes for one - which is a tricky length to write for. It's a nice challenge to fit an A and B plot into that timeframe. Also, over the process of the competition, Declan and Simon put our scripts through a lot of rewrites and reviews. But that was fantastic. It made me look at my script critically and with fresh eyes. I went through three big redrafts before the finals - which was a challenge but the script improved hugely. If you enter this year be prepared to work hard, collaborate and do big rewrites! But if you can't do that you're buggered as a writer anyway. 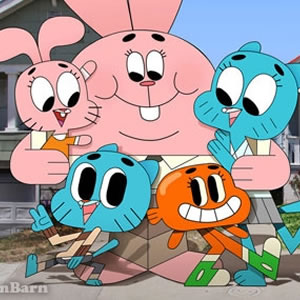 What's it like working on the animated TV show The Amazing World of Gumball?

I love it. And I'm not contractually obliged to say that. It's a clever, anarchic show that isn't afraid to do big ideas for the kids. Unusually for British television it's written by a team of writers, which is where collaborative skills from days in theatre become useful. You have to leave ego at the door and just be in service to the best idea - even if it means letting go of some material you're super keen on.

It also means delivering consistently. You're in a room for a few days and by the end of that time an episode draft needs to be on the table. That can be a lot of pressure, but it is the reality of working professionally. You have to be able to deliver good work consistently. It's a lovely environment to work in though - and I'm fortunate to be working with an old friend and long-time collaborator, James Hamilton, as my writing partner for my episodes. Now I see way too much of him.

How has life changed since winning The Sitcom Mission 2015?

It's had a huge impact on my career. Firstly, Blue Sky Thinking has been optioned by Hat Trick and is currently in development. Hooray! But aside from that it's got me into more offices and in front of more people than I ever thought possible when I entered. As I said before - it's hard to get attention in this industry. The showcase certainly helped that. Even people who didn't want to option Blue Sky Thinking wanted to talk about other projects and it means my 2016 is looking (potentially) very exciting. I'd urge anyone to take the plunge and enter The Sitcom Mission. Even if I hadn't had reached the finals the rewrites and creative process Declan and Simon put the shortlist through would have made it worthwhile. Do it!